I've intermittently worked on a new blog all day, but I think it's just going to have to live in my drafts file for now. It was unintentionally dark, and honest, but pointless. I try not to naval gaze for the sake of naval gazing. My novel is driving me crazy. I'm stuck on a particularly difficult section and the writing is dredging up the past in a not-entirely-helpful way. I figure I'll scare you off if I keep vomiting my deepest, darkest secrets, so in the spirit of blog preservation, I'll try something light and fluffy instead. 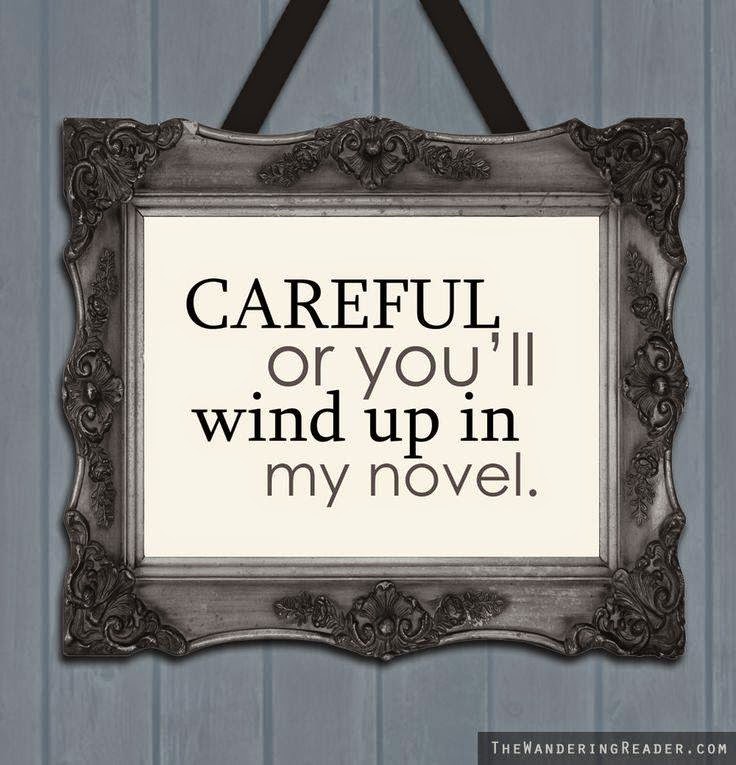 Let's talk instead about how dangerous it is to know me. :-)
I posted this image on my facebook wall, to the amusement of some of my friends. They either think they have nothing to worry about, or secretly delight in imagining what alter-ego I might create for them. As a general rule, I don't model my characters off one individual person. I'm much too self-centered to write about other people when I clearly have enough crazy emotional fodder of my own for five or six protagonists.  I have consciously written a character that was modeled on a friend exactly twice. Those two people, by all rights, were born to be literary characters, as they are far too lively and entertaining for mere mortal dimensions. So I simply propelled them towards their destiny. This is not to say that they are the only ones who will have a namesake character. They're just the only ones I'm certain of so far.
900 Miles has quite a large cast of characters, and as I've been writing it, I'll admit I have drawn heavily from the cast of characters in my own life.
Ivy is a mixture of all the qualities I admire in my best friends. She is smart, independent, funny, practical, pragmatic. She's the sort of woman I would seek out for friendship. She's not perfect by any means, but her good qualities outweigh her bad. She reminds me of two of my oldest and best friends, who incidentally, have never met each other, but are so similar it's scary. I enjoy writing her because it's a little like hanging out with the two of them.
Her love interest, John, shares many similarities with Tom. I based the Yankee doctor who moves south, experiences culture shock, and falls in love with a local girl on him. But John is really a composite of every man I've ever loved (be it friend, boyfriend, husband, or family) and his and Ivy's relationship, while fictional, is based on my favorite memories with them.
I've based some of the older characters on my grandparents and great-aunts and uncles. Ivy's friends are based loosely on my friends. John's mother and once-fiance are both haughty bitches, and I can happily assure you that I know no one who acts anything remotely like them in real life.
As I write this, another part of my brain is turning an idea over, thinking it might be a fun writing exercise to purposefully base my characters on random people just to see what would happen. I'm curious 1) if I could actually pull it off and 2) if my victims friends would recognize themselves in whatever characters I assigned them. If you'd like to be a guinea pig, let me know. As I mentioned up top, I'm stuck on a difficult chapter, and this might get my juices flowing.