I love my house. Still. Last year I spent a lot of blogging time waxing poetic about its 1930s-Bungalow loveliness, and nothing much has changed. In fact, a year into living here, I've become even more stubborn about preserving its 1930s-ness.

One of the things I do not like about this house is the curtains I bought when we moved in. At the time, I desperately needed something on the windows, and I didn't have the time (or the sewing skills) to be picky. The curtains I bought were the right color, and worked with the curtain rods already in place, but I have grown to hate them. I feel like I live in a hunting lodge with all that plaid.

Window treatments have proven a bit of a challenge in this house --mostly because I'm very picky. I refuse to put up mini blinds (too modern), sheers (pointless--in this climate, window treatments have to have some thermal abilities), have grown to really dislike having long curtains, and have decided cafe curtains and shutters are just too country for my taste.  The one type of window treatment I love is a roman shade. Simple, modern--but not too modern, and versitile.

From the moment we moved in I wanted roman shades on the windows. At first I wanted to make them myself. Unfortunately, last year I couldn't even thread my sewing machine. And I never found any fabric I liked. Nothing felt "right". For about five minutes I contemplated having some made to order, but then I saw how much they would cost, and again, I hated the fabric choices. I do not like solids, and was on the hunt for a mysterious bolt of red and yellow material somewhere that would be the fabric equivalent of my one true soul mate.

Yeah...tough order... I learned to co-exist with the plaid.

But I'm an incurable optimist, who likes to poke around when I go shopping--just to see what I can find. And while I was perusing Joann's for supplies for this year's Top Secret Christmas Craft, I saw it. 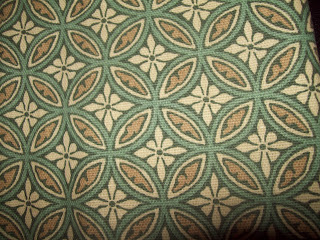 It stopped me dead in my tracks. I stopped and I looked at it and I said, "That is the PERFECT fabric... for KIRA'S house!" At first it didn't occur to me that it might be perfect for *my* house because it was neither red nor yellow, and I certainly wasn't planning on changing the house's color scheme (which I love) to greens and beiges.

But it was one of those things I just couldn't get out of my head. I loved the pattern. Loved the art nouveau-y, art deco-y, geometric-florally-ness of the pattern. It was just right. So I scoured the store, scoured the internet, scoured every other place I could think of to find this fabric in red and yellow. It did not exist. It existed in browns and caramels (too drab), and in bright blues and greens (too bright). Every time, I came back to the green. Tom liked the green. The boys liked the green. The green, it soon became clear, was IT.

And why shouldn't it be it? My favorite color is that lovely greenish blue (or peacock turquoise, depending on my mood). When Tom and I were first married, I had every intention of decorating in greens (that lasted about as long as it took to sell our newly-built Greenville house and moved into Sponge-Painted Acres in Cincinnati). And speaking of Cincinnati, this fabric reminds me of one of my most favorite places in all the world. The old Union Station Tea Room (that has more recently been converted into an ice cream parlor). 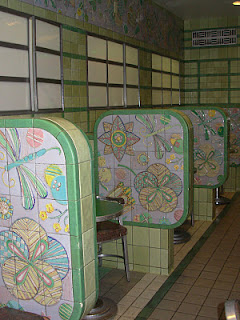 No, it's not exactly the same, but for me it evokes the same feeling I felt the first time I ever walked into that space, shrieked with glee at all the original Rookwood Pottery, and promptly died of joy in the midst of so much Art Deco loveliness. (Incidentally, my house was built in 1930, Union Station in 1933.) So when I say that I want to restore my house to the period in which it was built, this is what I am thinking of.

It's funny how one thing (like a fabric) can turn your entire world on its head. You're going along loving your reds and yellows and all of a sudden, your world becomes green and beige. 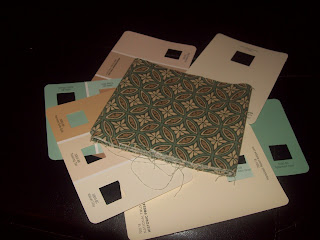 It's already pretty obvious, but this winter, Tom and I are going to be doing a bit of redecorating.