So Much Depends On (A First Day Of School)

Yesterday was Sam's revised first day of elementary school. Ever. It was supposed to be on Friday, but due to the calamitous events of the last few weeks, the first day of school was cancelled. First, Tropical Storm Irene dumped epic amounts of water on an already rain-saturated Upstate New York, causing 500 year floods and damage of extraordinary proportions. Then, just as we were starting to breathe again and began cleaning up the damage, Tropical Storm Lee came and dumped even more water into still-flooded waterways and overly-taxed locks. The locks held up, thankfully, because had they not, I shudder to think of what might have happened, but many are seriously damaged and in need of repair, in addition to all the needed repairs to bridges and roads in the area. But winter is fast approaching and making those repairs in feet of snow is going to be challenging, if not impossible. 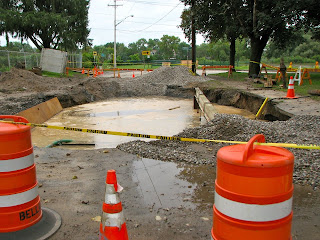 ﻿This is a picture of a sink hole right down the street from our house. Our neighborhood was fortunately spared from the horrible local flooding, but only by a matter of streets. We were lucky, but not unaffected. The huge village park by our house (and one of Scotia's crown jewels) is closed indefinitely. Sam was supposed to start soccer this fall, but that park and all its fields have been deemed too damaged and dangerous to play in yet. Plus Jumpin' Jacks (another crown jewel and Scotia landmark) was forced to close down early for the season.

This was a lot to digest for an adult, but Sam was really effected by it. He's suddenly afraid of storms, heavy rain, wind, trees, flooding... He still asks incessantly why everything flooded, why all the trees fell, why everything is closed.

About the same time that he became obsessed with storms, Sam also became obsessed with knowing whether there would be a train to play with in his new classroom. Some children suck their thumb, or need a security blanket, but since Sam was little, he has used playing with trains as a means to calm himself. I could tell he was very stressed out and needed some reassurance, so I emailed his new teacher and asked her if there would be a train set in the classroom. I explained that Sam really needed the security of playing with the trains for the first couple of days, and offered to donate a train set to the classroom. Once she agreed to this, Sam was relieved, and began to relax about school starting. (I was less pleased when I learned that his teacher planned to rotate the toys in the classroom and wouldn't always be giving Sam the option of playing with the train set.)

Yesterday morning, he and John excitedly waited for the school bus to arrive. 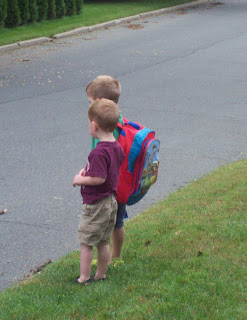 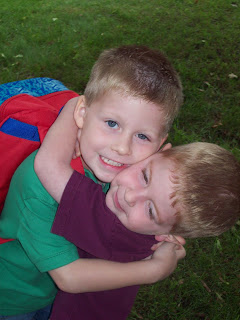 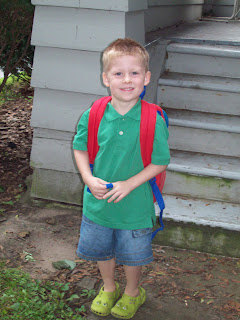 He looked so mature, so happy, so ready...

I excitedly waited for the school bus to drop him off in the afternoon. I couldn't wait to hear about all the fun he'd had, the friends he'd made, how great and wonderful Kindergarten was.

He fairly well burst from the bus, but not in the happy exuberant way I was expecting. He looked like a man just returned from a war zone, with the view of unspeakable horrors still in his eyes. I tried to greet him happily, but the first thing out of his mouth was,

"Some other boys played with the train and they wouldn't share with me."

The event had colored his entire day.

No. He hadn't made any friends. The boys were mean. No. He hadn't had fun. No. He hadn't played with anything else. He just walked around. By himself. And that was okay, he said. He didn't mind. And he didn't cry. But later, after his bravado wore off, he had a tantrum of epic proportions, screaming, crying, ranting--all about the mean boys who wouldn't share the train. It was obvious that he'd held himself together as long as he could, but the day had not been a good one.

My heart breaks for him. It broke for him for yesterday, and it breaks for all the other days that I won't be able to soothe his private pains. It breaks for him because, although he and I know what that train represents to him, to others, to his teacher, to the other kids in his classroom, it is just an abstract thing--him wanting the train. I wish I could make things better, but it's his time, not mine. After so many years of being so intimately familiar with every single, solitary moment of his life (beyond the few short hours he was away from me at preschool), I am no longer in a position to be able to observe the whole days of his life. From now on, it will be little snapshots, taken here and there in the brief moments we are together. For the first time, most of his life will be lived away from me. I didn't see the rest of his day. I only know what he told me. I know about the train.
I woke up this morning, a William Carlos Williams poem in my head:

Today I worry about my boy. He has entered the wide world without me.

And so much  depends on a train set, a big classroom, and one scared little boy.
Posted by Unknown at 3:45 AM