I Know It's Fall

...when I suddenly become VERY productive.

This morning I got up early and decided to use up the rest of the apples we picked at the orchard a couple of weeks ago. I canned 6 quarts of apple wedges in cinnamon red hot syrup. It went pretty well, except the next time I make them I'll leave out the vinegar--it gave the apples a slight pickled taste that I didn't love. Also, one of my mason jars cracked around the bottom and leaked bright red syrup all over the place. That was fun.... But after the apples were finished, I figured I might as well can some split pea soup while I was at it. That was a most-of-the-day-affair because the dried peas refused to soften for hours. While they were simmering on the stove, Tom and I and the boys walked a few blocks up to a local church that was having a little fair. Jumpin' Jacks was there in their trailer serving lunch, and we couldn't resist the opportunity to have a last cheeseburger of the season. We walked back home, and my peas *still* hadn't softened, so I went upstairs and made Sam a pair of mittens.

I had the furry fleece and the felt, but needed to run to Walmart for buttons, and while I was there, I had some inspiration for Sam and my Top Secret Christmas Craft for 2011. I bought supplies for that, too, came home, the peas *still* weren't soft, so I worked with Sam on a prototype Christmas present, and when that was finished, went back upstairs to my sewing room and finished the mittens. 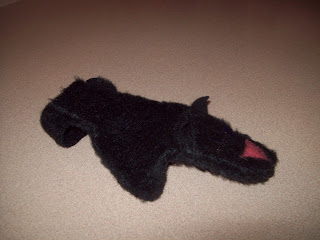 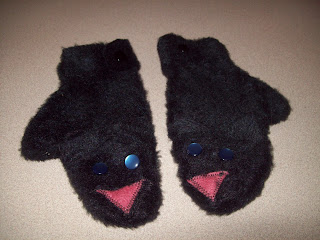 I know they look very homemade, but I was proud of myself, nonetheless. They don't show up really well in the picture, but the cat has two little ears that stick up and there's a tail that wraps around the wrist that buttons closed. They're supposed to look like our cat, Harley.

Once the mittens were finished, my peas had turned into mush, so I finished making the split pea soup. Now seven quarts of soup are in the pressure canner.

I love days when I get so much accomplished.
Posted by Unknown at 2:43 PM