Yesterday was one of the most productive days I've had in a long time.

My Caroline rapberry bushes (that were looking pretty sad all summer) have perked up and are producing a nice late summer batch of raspberries. Soon I'll have enough to can another batch of raspberry jam. Can't wait for that! But in the meantime, it's fun to get up in the early morning and go picking from my very own raspberry patch.

After picking, it was time for shopping. I found this pair of Crocs online (the style is called Dawson) and I thought they would be great for the boys for fall/winter. 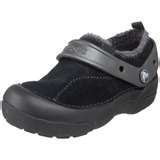 They slip on, but cover the heel completely, and are fleece-lined--so they're perfect for early, snowy mornings. I love wearing Crocs, the boys love wearing Crocs, we are all Crocs converts around here. I just hate paying Crocs prices (especially when Tom grumbles about me buying Sam $12 sneakers at Walmart). I'd been poking around online for a while, trying to find them on sale, without a whole lot of success. Either the store with the sale didn't have the right sizes, or the only ones they had were pink. It was always something... But yesterday, the heavens opened up, and the shoe gods finally smiled at me. I found the shoes (in the right sizes and colors) at Dick's Sporting Goods online, for $10 less than their price on the Crocs website, plus free shipping, and then I scrounged up an online coupon for another 15% off my purchase. Hooray! I love it when a plan comes together.

After I scored a good deal on my back to school shoes, I went to the gym early (as usual) and when I got home, the boys kept themselves occupied while I finished sewing some fleece pajama pants for Sam. They turned out really well, considering last year I didn't even know how to thread my sewing machine without the instruction manual. And then, since I was in such a Happy Homemaking groove, I whipped up two pairs of fleece mittens for John from the scraps. Granted, they are not the most beautiful mittens that ever were, but last winter, getting a pair of mittens on John was a daily, half-hour ordeal. These slide on easily and effortlessly, so I'm thrilled with the results. Today I might attempt Sam's pajama top, if I start feeling brave. It looks slightly more complicated than the pants, with a fancy (relatively speaking) neck band that I'm afraid I'll screw up. I'm still not feeling very confident in my machine sewing ability, although I'm starting to enjoy it more and more.

To cap our day, after Tom got home, we walked down to Jumpin' Jacks (2 miles round trip) to watch the water ski show there. The CBS Early Show was there doing some filming, and the piece will be broadcast on Friday morning between 8:30 and 9am. Sleepy little Scotia is getting a lot of attention all of a sudden between the Early Show coming here, and the filming locally of The Place Beyond the Pines. I love the life I can live in Scotia--the feeling of being transported to a simpler time--and I'm happy that others have discovered that about it, too.