A Hurricane In New York

Yesterday, New York was hit by a (very rare) hurricane/tropical storm. Being from North Carolina, I know what happens when hurricanes come inland, and I knew it was not going to be pretty. I was in 8th grade when Hurricane Hugo came inland and caused all kinds of problems in Asheville: landslides, flooding, downing trees--and we were a good 8 hours from the coast! I was expecting the storm to be rough--especially in our neighborhood, where houses are surrounded by HUGE 80-year-old+ trees. So after running around all week like Chicken Little, making dire predictions that were ignored by Noreaster-hardened New Yorkers, I spent Friday securing everything outside, taking pictures of our house and everything inside, and making sure we were well-stocked with emergency supplies. We'd been planning to be in Syracuse all weekend, because we were going to the state fair with Tom's parents, but since the storm was due to hit early Sunday morning, we drove out Saturday and came back that night--so we'd be here if, God forbid, a tree fell on our house, and rain started pouring in.

The storm itself was a doozy, and we were lucky that we didn't have any major damage. One limb fell in the backyard and narrowly missed the swingset, and our basement flooded, but that was it. Other neighbors were not so lucky, with huge trees down on their houses and wrapped around/being held up by nothing but power lines. 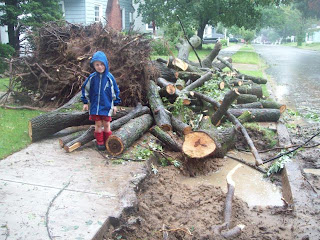 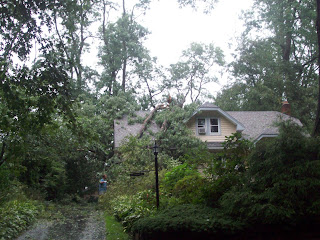 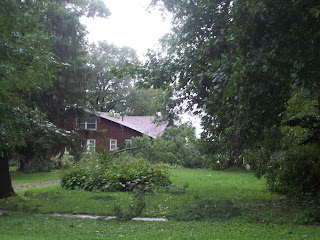 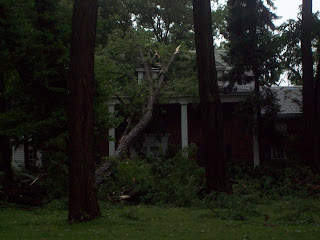 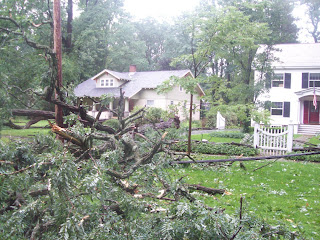 We went out after the storm appeared to have passed to check on our boat (which had been pulled out of the Mohawk and was sitting on its trailer in the safety of the marina's parking lot) and there was quite a bit of flooding going on already. 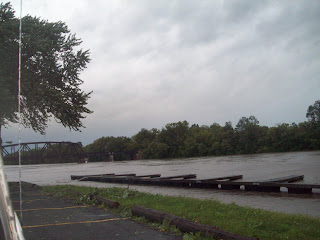 Usually, our marina's docks are down a very steep hill, but last night the river level was all the way to the parking lot. 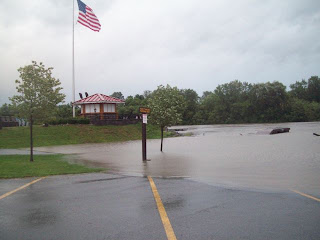 The public boat launch was flooded halfway up to the parking lot.﻿
﻿ 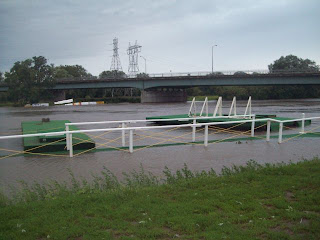 The water ski team docks at Jumpin Jacks were also level with the parking lot. 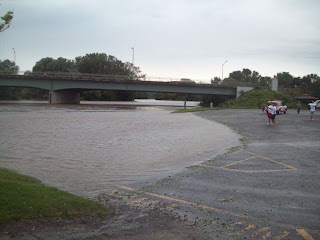 The Mohawk River was over its banks and into the Jumpin Jacks parking lot. There's usually quite a large bank/drop off to the river, so this was very unusual. People were amazed at the depth of the water. 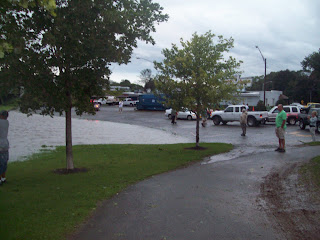 ﻿Here's another view of Jumpin Jacks from the back. A very disconcerting sight.
Unfortunately, the river hadn't even begun to crest. Here are pictures of Jumpin Jacks taken today: 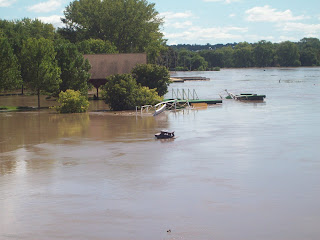 The trees to the left of this picture are where I stood to take the pictures above last night. The entire area is under water now. If you look in the center of this picture you will see one of Jumpin Jack's picnic tables floating down the river. The water ski docks appear to have broken apart and are floating downstream too. 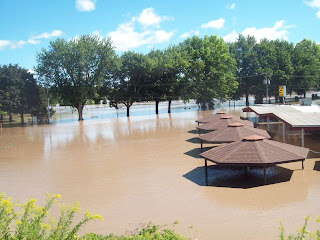 The water was halfway up the side of the grill and still rising. From this view, you used to be able to see the Jumpin Jacks parking lot, Schonowee Ave, and the entrance to Collins Park, as well as a lovely walking/bike riding path up a little hill. All have disappeared. The Mohawk River and Collins Lake (which used to be invisible, waaaaay off in the distance) have merged now. 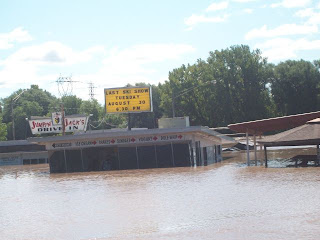 While we were standing there, one of the windows of the diary bar broke out, water began rushing in, and you could see trash cans floating on top of the water. Jumpin Jacks has been a major landmark for Scotia for over 50 years, and it's just heartbreaking to watch this happen. 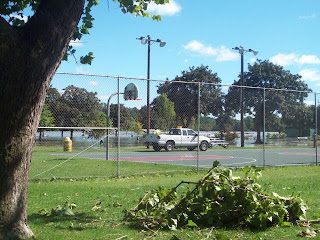 Here Collins Lake is lapping at the basketball courts on the other side of the park from where the lake should be. 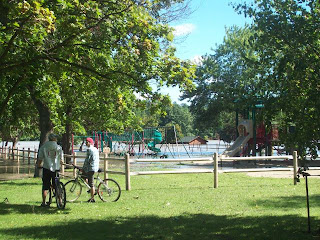 It's covered the playground, too. 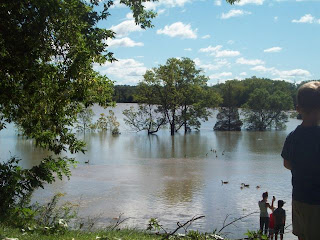 It's a really bad sign when there's a lake with geese swimming where your sledding hill used to be.
I haven't been able to check on our boat, but I imagine the marina is under water by now. All the bridges out of Scotia were closed today (some have reopened now, but not the one that runs next to our marina), and the only reliable way in and out of Scotia is from the north. Schenectady is also flooding--especially the Stockade--a beautiful neighborhood of early colonial homes on the other side of the river from us.
Our water supply is most likely polluted, and there's talk that the water supply will be shut off indefinetely. Dams are under stress, and there's some concern they will fail. It's a real mess.
Luckily, we have power (which was restored after three hours DURING the storm) and the village was also hard at work all through the day yesterday and today cleaning up debris. The village employees who worked through the storm were amazing. The roads were cleared almost as fast as the trees fell on them.
The flooding clean up is going to take a lot longer. Honestly, I've never seen anything like this. Yesterday was bad, but today has been surreal.
I'm hoping that the worst of it is over. May tomorrow be a better day.
Posted by Unknown at 10:36 AM