Mother's Day (A Time To Grow)

In the Northeast, it's customary to start planting your garden on (or after) Mother's Day, and since I'm not a patient person in the best of times, I wanted to get my garden started as soon as possible. When Tom asked me how I wanted to spend the weekend, I told him that all I really wanted to do was plant a garden,﻿ but that would necessitate him making me a raised bed to start it in.
Our yard is really small, mostly shady, and since it's perched on top of a hill, it slopes badly. We had had the "where to put the garden" discussion several times, and I just couldn't bear to give up any more of the backyard than I already had (soon it will be mostly taken up by a large swing set). When we moved into the house, there was already a bed built next to the house on the sloping part of the yard. In it, were two (very) neglected raspberry vines and a whole lot of weeds. Tom and I considered digging up the raspberries and re purposing the bed, but I have a killer raspberry jam recipe, and have fantasies of growing a gigantic raspberry patch in that spot. So that idea was out.
While we were on our cruise, a storm blew through and knocked a piece of siding off the house. Last weekend, Tom and our neighbor Joe climbed up on the roof to fix it, and we ended up spending more time on the hilly, unusable side of the house than we ever had before. We realized that 1) the spot got full sun, 2) it wasn't likely to ever be used for anything else, 3) was protected from trampling by boys because it was outside the fence, and 4) if a garden was grown there, it would save Tom from having to mow a substantial amount of that very unpleasant hill.
Things had come together...
On Saturday, Tom sketched out a plan, went to Lowe's, and whipped me up this raised bed. It never ceases to amaze me what he is capable of. 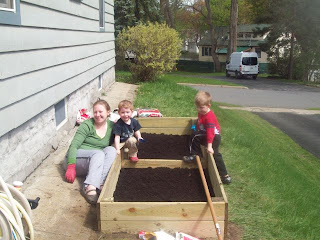 ﻿
Meanwhile, I attacked the forlorn and overgrown raspberry patch, clearing it entirely of weeds (until Tom dumped all the dirt/grass from the spot the raised bed sits on right on top of it--another project). At some point in the near future, I'm going to get some more raspberry plants and Tom plans to build a wood frame and wire support system that will hopefully get a patch to start growing.

On Sunday, we filled the raised bed with dirt and I planted the bed with lettuce, peppers, tomatoes, beans, and peas. I can't wait for everything to start to grow! 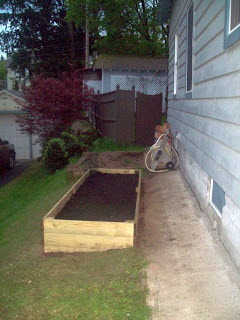 This is what the two beds look like right now.

It's nice to have a new start this spring, since it seems like a lot of things have come to an abrupt and traumatic end for us.

Today Sam's school gave the official word that they will be closing their doors forever after being in this community for 50+ years. It was a co-op preschool (a new concept for Tom and I) and we came to love the chance to hang out with Sam in his classroom. Sam had loved every minute he spent there, too. I credit its small, family environment for easing his transition to New York. The first several months of school, John wept bitterly every morning at drop off because he wanted to go there so badly. And he was so looking forward to getting to go there himself next year.

The last few days have been spent scrambling to find him a new preschool. And I know that sometimes endings make way for newer, better things to come along, but it feels very bittersweet to say that John's new preschool is going to be a much better experience (for me, anyway). The new school is not a co-op, so I will never be required to spend any time in the classroom. Also, this particular preschool is offering a 5 day 3-year-old program (and that is completely unheard of around here). I can see next year stretching out in front of me and I can imagine all the free time I will have to write, run errands, and work out while both boys are in school every day. But at the same time, I really can't be happy about it, because I will sincerely miss the relationships I have at the preschool we go to now.

I also miss Sammy every single day. The pain of that decision never goes away, even though our situation at home is much improved without the constant fear of getting bitten. I always loved having two dogs of very different temperaments: the dainty, homebody and the roll-in-the-dirt, bark-at-the-squirrel, ready-for-anything terrier's terrier. I was telling Tom that more than anything, I wish the boys could've seen him in his heyday, back when we lived in Ohio, and spent our weekends with him in Kentucky, entering him in the terrier trials. Having Sammy around was like parenting (the doggie equivalent of) a little leaguer. He gave us something to cheer for, a team of one we could belong to. Without him around, there's very little to root for.

I was hoping that me running the Freihofer 5K in June could fill that void a little, but the whole experience of training for this run has filled me with frustration and despair. First, there was the realization that Wii running was nothing like treadmill running, and that treadmill running was NOTHING like road running. Every time I've upped the amount of impact I've suffered for it.

I've had back and knee problems my entire life. The chiropractor is my saving grace. When I was little, I also wore orthotics in my shoes because my feet didn't absorb shock and would ache and cramp horribly at the end of the day. As I grew older, the orthotics trained my arches to curve, and my shock absorbing abilities improved, but were never 100%. When my podiatrist strongly cautioned me against dancing in toe shoes because of the permanent damage it would do to my already-uncooperative feet, I quit ballet because I just couldn't progress anymore. And now I'm starting to feel a similar sense of deja vous about the whole running thing too.

I desperately want to be a runner. I love the feeling of my body rhythmically pounding forward, the wind in my hair, the feeling of intense exercise pumping blood through my heart. What I don't love is the constant foot, calf, and knee pain I'm experiencing. The pain that lasts for days. That isn't a good pain. My chiropractor wondered aloud if I had arthritis and suggested that I get some x-rays done of my knees... I don't know why I'm having so many problems, but part of me wonders if I just need to throw in the towel, accept the limitations of my body, and stick to exercise that feels good--like spinning. Kira and Tom think I should just walk the 5K--but covering ground was never the point of doing this. I wanted to impress my husband and inspire my kids. I wanted to run jubilant through that finish line having run that entire course. It was all about doing the seemingly impossible, the seemingly unexpected. Short of a miracle and some strong painkillers, I know right now that it's not going to happen. I keep thinking tomorrow I'll power through the pain... except lately, I just can't seem to shake it off. The pain is really bad. Just admitting that makes me feel like a quitter and a loser. And then I feel despair all over again... because I can't just will my dreams into being anymore.
Posted by Unknown at 9:57 AM