Earlier this week, the boys' swing set arrived. It's arrival coincided nicely with Tom's Friday off. Since his brother also had the day off (one of the benefits of working at the same company), he very masochistically sweetly volunteered to come help Tom with its assembly.

I'll state for the record now that I was sure it was going to be a major ordeal.

First of all, we bought the swing set online. And there were no reviews on it anywhere (because, trust me, I looked). And it was on sale. That is usually a very bad combination of factors--that sale price is usually for a reason. But we needed a swing set with 1) a small footprint, that was 2) rigid enough to sit on a (majorly) sloped yard, that 3) had a built-in clubhouse. The clubhouse-thing was criteria I attached to it, because the boys love playing restaurant and I thought a clubhouse with a play kitchen in it would keep them entertained for hours.

When I found the Backyard Discovery swing set, ironically named Saratoga (which is right up the road from here), and it had a small footprint, a clubhouse, and a covered picnic area, I was sold. Nothing we looked at online met our criteria quite as well, so we took a chance and hoped it wasn't too miserable to put together.

Tom and his brother are both mechanical engineers, so one way or the other, the swing set was getting put together. Whether or not it was accomplished without excessive swearing and a diatribe about crap lumber and cheap Chinese craftsmanship was another story...

Earlier this week, after the boys were in bed, Tom and I spent a couple of hours in the garage sorting all the wood pieces (Chinese cedar) and accounting for all the hardware. The pieces were all labeled alphabetically (in the tiniest print I've ever seen), so after everything was sorted into piles, I used sidewalk chalk to label each pile again-this time really big, so we could see everything at a glance. This saved us so much time, you have no idea. I would also suggest printing out a second copy of the instructions if two or more people are going to be working at a time. And designate someone the "Go-fer" (that was me). While Tom and his brother were working on one step, I could easily look up the next step, and then get the wood and hardware together than they were going to need. We started working around 2:30pm, took a dinner break, and finally stopped working for the night around 8:30 (when it got too dark to see).

As you can see, they made amazing progress. 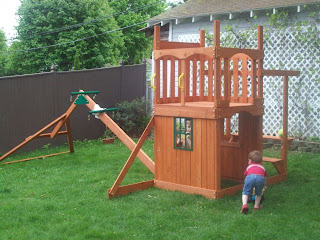 This morning, we were back out there around 8:30am and finished around noon. We did not build or set up the monkey bar that comes with this swing set (it is supposed to hang over the little clubhouse door on the right) because we think that the boys (almost 3 and 5 respectively) aren't quite old enough yet to safely hang (or fall) from so high up. We'll probably put it up in a year or two, but for now we didn't think we needed it, and the swing set is perfectly stable without it. 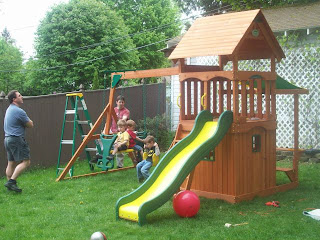 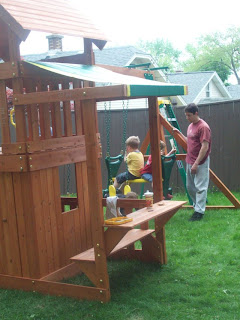 Here is the little attached picnic table. We elected to leave out the green window panes on this window to create a pass through so the boys could send "food" to their "customers".

Here are some pictures from a variety of angles: 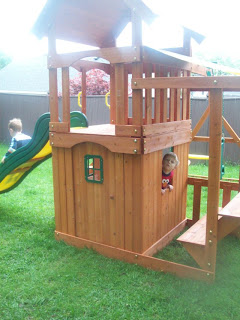 View of the side and the clubhouse door. 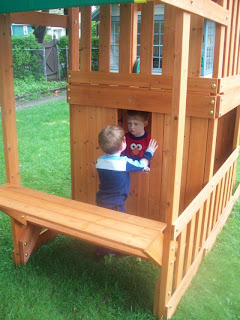 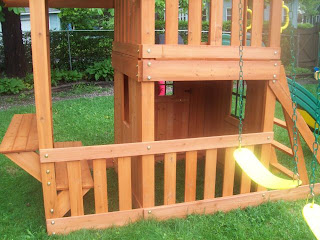 Side view, looking into the clubhouse. Picnic table is on the left. 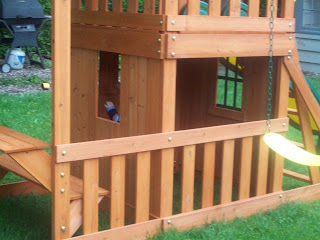 Another view of the clubhouse. 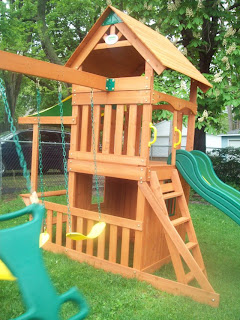 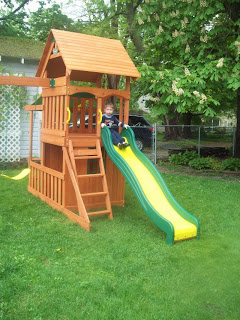 The boys got to enjoy their swing set for about an hour, and then it started to rain. More rain is predicted for tomorrow. We were lucky to get finished when we did.

Tom (an engineer, remember, and therefore exceedingly picky about these sorts of things) was quite pleased with the swing set on the whole. His only complaints were that some of the directions could've been clearer, and that when he built the clubhouse, the instructions seemed to indicate that the boards should be mounted flush, and he ended up having to re-do the pieces with small spaces between them because they didn't actually fit flush after all.

The swing set is pretty small, and definitely isn't designed to support an adult's weight, so I have a feeling the boys will outgrow it more quickly than some of the bigger sets, but a bigger set wouldn't have fit in our yard anyway, so it's a moot point.

I know it's going to get a lot of use this summer.
Posted by Unknown at 4:31 PM