As promised, here are all the details of our trip to Bermuda. We had a fabulous time and it was great to get away by ourselves, even though Tom and I still spent an inordinate amount of time talking about the boys, wondering about the boys, taking pictures of things the boys would want to see (a Bermudan street sweeper, for example), looking for things to take back to the boys, as well as spending a small fortune to call home to talk to the boys. In our defense, we left them while they were sick--running fevers with bad coughs--and were worried that Sam might be developing an ear infection (he wasn't, thankfully).

I think as parents, you can try to get away, you can attempt to re-capture your kid-free days, and it's futile. Once you become a parent your whole world shifts and, without the kids around, you sort of don't know what to do with yourself.

I'm sure you're probably picturing Tom and I curled up in the fetal position in our stateroom wailing "We want our babies!" But it wasn't nearly that pathetic. We missed the boys, yes. But we took full advantage of our time away from them, too.

Saturday afternoon, our ship (the Carnival Miracle) docked at King's Wharf--which is the furthest point from the rest of Bermuda imaginable. We immediately left the ship for our first excursion of the trip--kayaking at 9 Beaches. From the brochure advertising this trip, Tom and I imagined that we would be on placid water, sleepy little inlets or rivers or something. Surprise! This was an ocean kayaking trip, a tropical storm was thinking about forming to the south of us, the wind was so strong our guide joked that we would be on the first-ever para-kayaking excursion, and the water was so rough that we were paddling through 1-2 foot chop. It was definetely not what we expected--and probably more fun--in a man versus the sea kind of way. 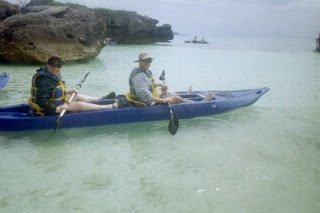 We paddled out to see a shipwreck. 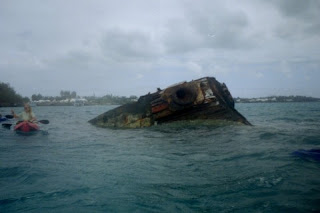 And explored some caves. That was kind of cozy. Paddle in the wrong direction and you can get your kayak wedged in pretty tight. I wouldn't have minded getting stuck in there though. It was beautiful to look down and see fish swimming beneath you, hear the waves lapping against the walls, and see fossils (yes, fossils!) imbedded in the coral. 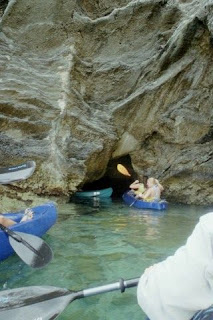 Our guide pointed out the intriguing brain coral that grew underneath the water.

And took us past these beautiful houses at a now-closed Eco Park. 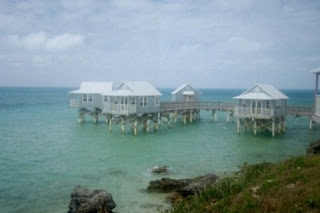 The amazing thing about these houses is that the walls are made of canvas. We parked the kayaks and went inside one and they were surprsingly warm. Plus, they had glass floors so you could look down and see fish swimming beneath you. Very cool. Apparently, the site will soon be turned into a condo complex, which is a shame, because I would much rather stay in a little canvas house on the water than in a condo any day. But maybe I'm the only one?

We were actually in Bermuda on Easter Sunday, and since everything closes on Sundays in Bermuda anyway, we expected things to be really closed for Easter. We were pleasantly surprised to find out that there was a reef fishing excursion offered on Easter that hadn't been advertised on the Carnival website. Tom grew up fishing, and I have come to really enjoy it in the 10+ years we've been together. We also went on a fishing excursion once in Freeport and loved it, so we decided we really couldn't pass fishing up this time either. 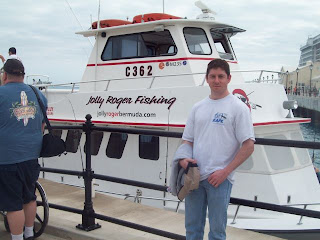 We went out on the fishing boat with probably 30 other people and I was one of four women on the boat. 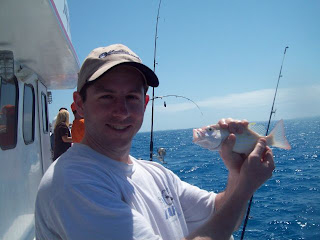 Tom's first catch was, shall I say, underwhelming... 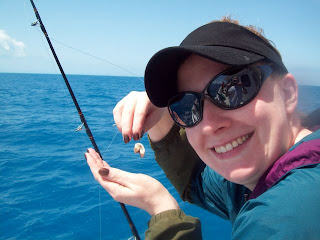 Tom thought it was hilarious that I was baiting squid with my manicured nails, so he took this picture of me hand-modeling my fish hook.

(On a side note, that was the best damn manicure I have EVER had. I had them done at a Regal Nails inside the local Wal-mart, and my polish stood up to kayaking--scraping my fingers across the boat with every paddle--fishing and dried squid bits on my nails--salt water, and other general abuse. I was shocked they held up so well.)

In total, I'd say Tom and I both caught half a dozen fish a piece. And it was so relaxing just hanging out on the boat all day. It's definetely our preferred way to spend a vacation.

﻿
Monday was our last day in Bermuda, and since Saturday and Sunday had been taken up with all day excursions at sea, we decided to do a little exploring on land. First thing in the morning, we took the ferry to Hamilton. It's a beautiful city and I'm jealous of anyone who lives there full-time. 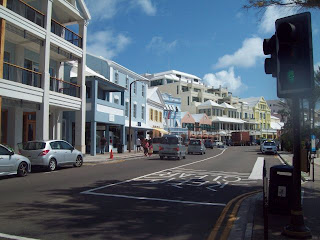 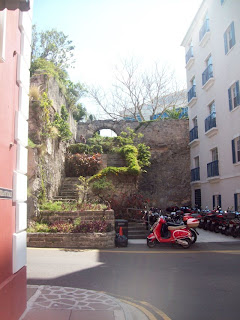 Since we spent over $11 on a soda, a smoothie, and a croissant in Hamilton, we headed back to the ship for lunch. Afterwards, we went back out to explore the Maritime Museum at the Dockyard. Unfortunately, several of the exhibits were closed due to some rearranging/new planned exhibits so there wasn't that much to see. What they did have was very interesting, though. We saw a 14 foot sailboat that a pair of Bermudans sailed across the Atlantic in to NYC. Considering how rough our crossing was back to port--the thick, thick fog, the 30-40 mph wind, and the massive waves slamming into our (very big) cruise ship, that was quite a feat! Those guys were brave!
I'm glad neither Tom nor I are prone to seasickness because the trip across the Atlantic was not the placid little paddle we've always experienced going to the Caribbean. You also feel very alone and exposed sitting in the middle of the ocean, far, far from any dry land. Tom and I had a balcony, and I spent a good bit of our sea days sitting out there reflecting about what it must've been like for those who made the crossing in the 1600s--without the benefit of a lido deck buffet and all-you-can-stand bingo. I definetely want to go back to Bermuda (in a modern cruise ship). Next time, Tom and I will bring the boys with us.
Posted by Unknown at 5:13 AM