I feel like I'm all doom and gloom lately, but I guess things are what they are. Generally speaking, I'm very happy and looking forward to spring, but we've got a hard decision to make before then. 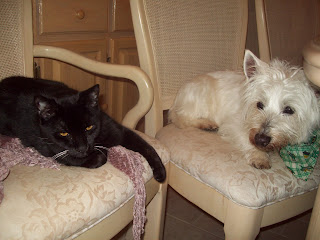 Tom and I adopted Sammy (shown here with our cat Harley), our male westie, from a rescue group back in 2001, the summer before we got married. I already had Tuendi, grad school was ending, and I was afraid she'd be lonely without a buddy. I was on petfinder.com one day and found a little 5 month old Cairn Terrier in Atlanta and inquired about adopting him. The rescue group also had a Westie, but he was sick with a pancreatic disorder, and had been in and out of rescue twice already in his short 1.5 year life. I didn't really want to adopt a dog that required expensive medications for life, but in my email I added that my heart really went out to this dog, Sammy, because I had a lot of stomach issues too. (At the time, I was having a severe reaction to gluten and didn't know the reason.) The rescue coordinator wrote me back. The Cairn had been adopted, but Sammy, the Westie was still available if I was interested. I didn't want to be interested. But something about him wouldn't let me rest. I knew he was my dog. Tom thought I was categorically insane to adopt a dog that had medical issues, but I ignored him, and one Friday in June, Tuendi and I drove down to Cummings, Georgia to meet him.

It couldn't have been a less promising beginning. We met in the fenced yard of a vet's office and Sammy studiously ignored me, he ignored Tuendi, he ignored the fact that we had driven 2+hours to bring him home. Finally, exasperated, I got down at his level, looked him in the eye and said, "Look, I'll bring you home with me if you just give me some sign that you like me." He moved closer, but his two front paws on my knees, and looked me dead in the eyes. I had a new dog.

And this new dog was a wreck. Dangerously skinny, smelly, too weak to hold his head up. He'd just been diagnosed with EPI and hadn't been on his medication long and he was not healthy, or even close to healthy. My entire family, plus Tom, and possibly Tuendi, thought I'd lost my ever-loving mind, because frankly, he looked terminal.

And then a few weeks later, you couldn't see his ribs anymore. His eyes began to shine. He wagged his tail. Barked. His personality emerged--a very mischievious Scotsman--curmudgeonly, but loveably so. And a better westie you never saw in your life. He wanted to hunt and snapped his collar in half treeing a squirrel. We found him upside down in the dog food bag, helping himself to a snack. He was snuggly, and happy, and you couldn't tell he'd ever been sick at all.

We moved to Cincinnati, where Sammy staked out the long flower pots on our back deck. From there he surveyed the yard, and speedily ridded it of furry trespassers. We started driving him down to Kentucky, for the terrier trials. Even though he was competing against Jack Russell Terriers (and they are a turbo-charged variety of terrier), he was a force to be reckoned with when competing in flat racing and hurdles. He even won his division in the Barn Hunt (rat is placed in a tube, and hidden among bales of hay. Fastest time to the rat wins.). Tom and I spent one of our first anniversaries at Camp Dogwood (summer camp for humans and their dogs) and had a blast introducing Sammy to lure coursing, too.  He was an incredible athelete, an amazing hunter. A Terrier with a capital T. We loved watching him have his doggy adventures and knew that if not for us, and rescue, he might not have survived to have them.

When we moved back to Greenville, Sammy again found a favorite perch in the backyard--this time on the picnic table under the swingset, and he spent many happy hours sitting outside, enjoying the sun. There weren't any terrier trials nearby, but we often took the dogs to the park, and up to Asheville for visits, and the dogs were happy. When Sam was born, the dogs had a bit of an existential crisis (but didn't we all?), but it was Sammy most of all, who loved romping in the backyard with Sam and a ball.

Then, a couple of years ago, right after John was born, Sammy became different.

I don't think the birth of the boys caused Sammy's personality change, but they no doubt exacerbated it. First he became crankier than usual, staying away from us as much as possible, wanting to spend all day outside. Then he became food aggressive. Jumping on the table and stealing anything in reach. He stole food from Tuendi. He stole food out of the boys' hands. He was constantly into the cats' food, and anything else he could find. One Thanksgiving, while locked in my grandmother's bedroom, he ate a month's worth of vitamins... And then he became aggressive. At first it was occassional thing--he'd have an off day and be extra snappish. Then he was snappish all the time. And then snappish turned into snarling, growling, lunging, and biting.

We've been dealing with this a long time now. I thought maybe he was out of sorts about our move to NY and would snap out of it, but since we've moved to NY, it's only gotten worse. He bites. He bites us. He bites the boys. He bites their friends. He's a small dog with a small mouth, so he hasn't broken skin or caused a serious injury, but it's an unpredictable liability.

I've taken him to the vet, who agrees with me that he's not an inherently viscious dog, and is probably getting age related pain (he's 11 now). The vet prescribed a steroid that worked great for about a week and then it didn't work at all. So I called the vet, and he prescribed a narcotic, to be given in conjunction with the steroid. Sammy was great for a few days, but slowly, incidiously, the aggression has returned. He growls visciously in his sleep. This morning, John was 10 feet away from him, turned toward Sammy, Sammy started growling, and chased John away from us--and not in a playful, friendly way.

I never thought this day would come, but I think Sammy needs to be put down. The thought of it absolutely breaks my heart. I don't even want to think about life without him--or the him he used to be. And ordinarily, I would consider rehoming him, but he's sick, and he's in pain, and I don't think he has much of a quality of life anymore, regardless of who he lives with. Tom and I have been talking about what to do with him for months now, and just can't bring ourselves to make the final decision, but I think it's ultimately the decision that we're going to have to make--sooner or later--before someone gets seriously hurt.

Those of you who know Sammy, know that we love him like our own children, and this decision is very, very painful for us. I'm still not sure how I'll live with myself afterwards. I think about how quiet the house will be without him and just want to cry.