I got a messge on Facebook from one of my neighbors in SC, wanting to know how we were coping with the snow. We've gotten A LOT of it lately. My neighbors say that this is an unusually massive amount of snow for this time of the year. Usually this is all the snow they see for an entire season. Well, guess what? There's another storm barreling down on us Tues night/ Wed and it looks like we're going to be buried in heavy snow (around 8 inches is the current estimate--of course that number could change). So I decided to take pictures of what we've got on the ground so far, because I'm pretty sure most of my southern friends would need to see the pictures to believe it. 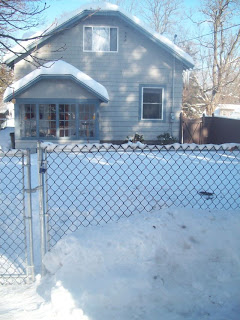 Here's our backyard. It's hard to tell from the picture, but the snow is two feet deep on both sides of the fence. We're starting to worry that the dogs will be able to walk right over the fence if we don't dig a moat around the fence line. 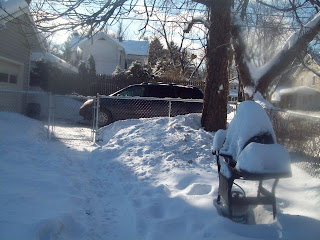 Just FYI, this is what we have to walk through every day to get to the driveway. In NY, you wear boots to get in and out of your car, and then change shoes when you get to school/gym/etc. I made the mistake of wearing my tennis shoes to the gym today and when all the snow in the treads melted, there was a slush puddle underneath my bicycle. 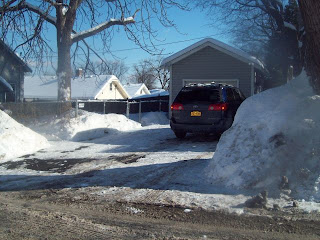 This is the driveway and the two gigantic piles of snow on either side. I've clipped the pile on the right trying to get into the driveway and that was scary. Also one car garage=Brittany has to keep the van pulled way over to the right so Tom can get in the garage, which means I have to climb through piles of snow to put John in and out of his car seat. FUN! Also, whenever we dig ourselves out of the driveway, the snow plow comes through and creates a nice barracade of half-melted slush/snow at the end of the driveway that we have to shovel regularly. 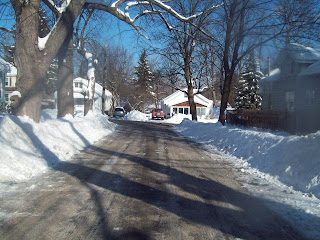 However, the snow plows do come through regularly, and this is what our roads look like. Life goes on here pretty much as always despite the snow, and nothing shuts down. School has been closed 3 times, usually on days when the snow is already deep by early morning and expected to go on all day. It takes a while for the plows to hit the side roads. When the plows do come, they push the snow away with the plow on the front, and treat the remaining snow with some sort of solution out the back of the truck. Very efficient. And since Tom has to park in an open parking lot at work, the facilities staff comes out at the end of the day to help people dig themselves out. Tom literally has to put a broom and a shovel in the trunk and excavate the car at the end of the day. 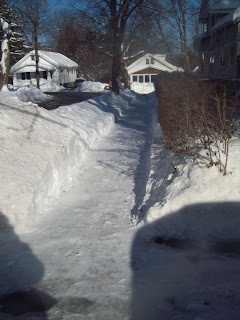 And after that, he comes home and snow blows the sidewalks. I shovel the sidewalks if the snow is expected to get deep because there are tons of dog walkers in our neighborhood and the mailmen travel by foot door to door. It's nicer for them if they can walk on a shoveled sidewalk. Everyone is the neighborhood pitches in. Those of us with snowblowers dig out the ones who don't. 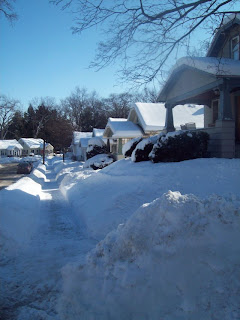 One of our neighbors plowed this entire portion of the sidewalk in front of our house. 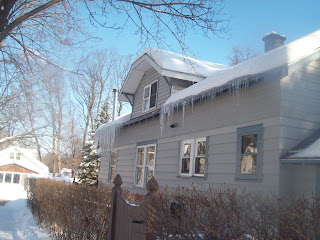 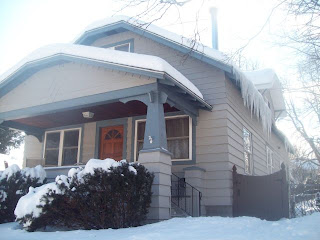 And you've got to watch out for killer icesicles! They're absolutely crazy around here. Some are so long on some houses they touch the ground!

Looks crazy, right?
Posted by Unknown at 9:03 AM