A Walk In The Snow

Yesterday we had snow﻿ flurries pretty much the entire day. The boys were so excited. When I picked Sam up at preschool, he begged me to let them go outside and play in it--even though there wasn't much to play in.  After lunch I bundled the boys up and we went ouside.
We had just shut the door behind us when we heard a train horn. There's a train bridge right beside the road that runs parallel to ours, so we hustled down the street so we could watch it go by. 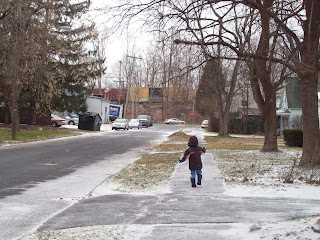 Sam was so excited. 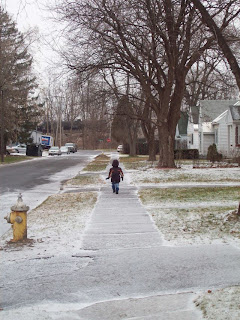 After the train disappeared from view, we took a long walk around the neighborhood. It was a beautiful day, blustery and crisp, and the boys enjoyed scooping up handfuls of snow and throwing it at me. I think they're really going to be in heaven as soon as we start getting some real accumulation. 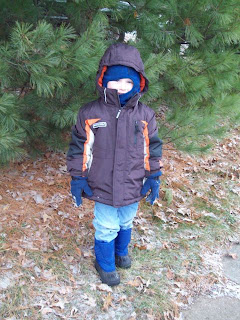 For now we've only got flurries in the forecast, and that suits me fine. We're in the part of New York that is, mercifully, spared from lake effect snows and we aren't supposed to get 6+ inches until January. That's a relief. This southern girl needs to ease into the season. 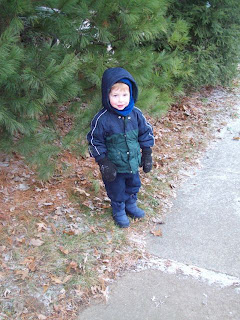 But I am looking forward to all the winter activities we can do--like sledding, making snowmen, going skiing, snow tubing, and snowshoeing. If things keep going as they have been, I'm planning on having a really fun winter.
Posted by Unknown at 6:49 PM

Labels: walk in the snow