Yesterday was the first real accumulation we've had in New York this year, and we had a great time playing in it. I took out some of the boys' sandbox toys and they put them to good use in the piles of snow in our backyard. 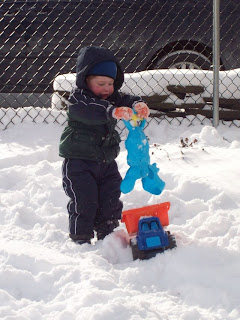 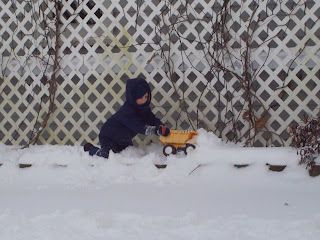 I'm pretty sure that when our South Carolina friends got these particular toys for the boys' birthdays, they never expected them to be used like this.

It was chilly yesterday (in the teens) and we all got cold much too soon. So we came inside, ate some lunch, and then to make up for the abbreviated play date, I brought the snow indoors, making a wintertime delicacy for the boys--Snow Cream.

I don't know if its a Southern thing, or if Tom (who I base all my assumptions about Northerners on) lived a very deprived childhood in New Jersey, but neither he nor his family had ever heard of such a thing. Leave it to a Southerner to think to add milk and sugar to what was once inedible and then call it food. But take it from one who knows, nothing else in the world tastes quite so much like winter.

When I was younger, my great-grandmother always made vanilla snow cream, but last year, when we had a freak snowstorm in Greenville, my neighbor Amy and I experimented with making chocolate. It's not bad, so below you'll find instructions (with variations) for both kinds.

The first thing you'll need is snow, and I would recommend using freshly fallen snow at least 4-5 inches deep. Get it from an undisturbed surface off the ground (I used the top of our grill in the backyard, but you can use tables, porch railings etc...). Scoop some up in a bowl and bring it inside. 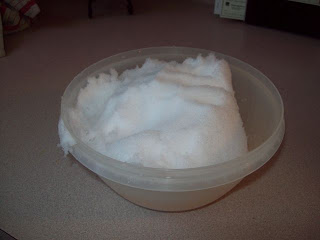 Then add enough milk to give it a creamy (but not runny) texture. You'll probably want to err on the side of not-creamy-enough because it melts fast and will become runny quickly. 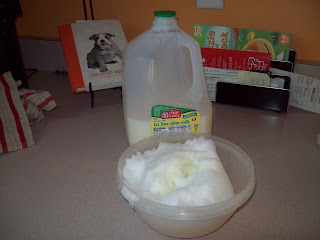 Stir all the snow into the milk. It should look similar to this when you're finished: 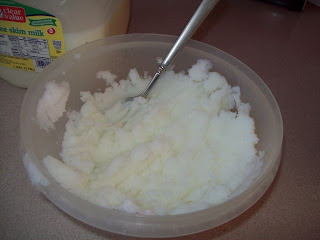 Then either add vanilla and sugar or chocolate milk mix to taste. I like a strong chocolatey taste, so I added quite a bix of chocolate milk mix, and then broke out the Bailey's chocolate flavored coffee creamer for the batch I made yesterday. When adding vanilla, the vanilla can become overpowering fast, so always add a small amount, mix it well, then taste it before adding more. Sugar, on the other hands, makes everything taste better, so don't be too stingy with it. 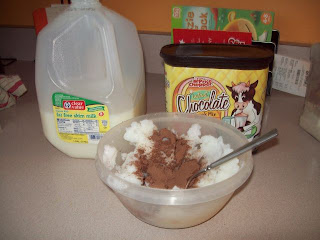 Stir everything together again. If you're making chocolate, it'll look like this: 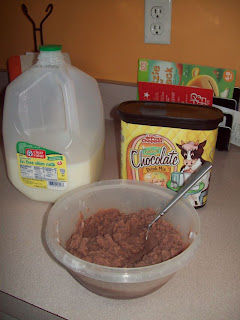 If you're making vanilla, it'll just look like creamy snow. Serve it up in a bowl and enjoy.

Note: This doesn't re-freeze well, so no storing it for summertime with last year's snowball. :-)
Posted by Unknown at 10:02 AM