The Holidays Are Coming!

The holidays are coming!

(I felt a little like Paul Revere as I wrote that... and if you stop and think about it, he and I were both alarmed by the imminent arrival of the Red Coats--although Santa's is trimmed in fur and what he's packing is anything but scary.)

So far we've managed to get the tree up. 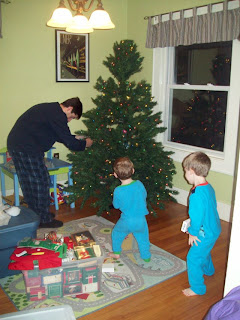 We had to put it up in the boys' playroom because there just wasn't any room for it in the living room and dining room (my first and second choices). It turned out okay though because the tree is covered in nothing but train and car ornaments, and it looks like it belongs there.

The boys had a great time putting up the tree. They were clowning around for the camera and when I said, "Make a silly face," I got this: 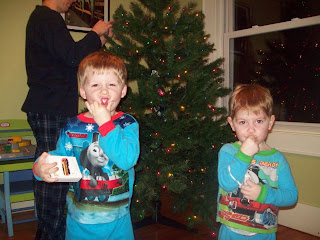 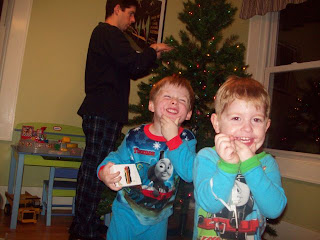 I know what you're thinking... Wierdness is genetic.

When it came time to decorating the front of the house, we ran into a snag. Our light nets for the shrubbery are woefully undersized compared to the three giganormous shrubs in front of the house. We only have two nets and they might cover one shrub (and Tom is worried about needing at least three extension cords out there). So we had to scrap that idea.  We have icicle lights to hang from the gutters, except the house doesn't have gutters, and Tom doesn't want to nail them up (he's afraid the nails would rust and the holes in the wood would cause wood rot). So for now, our sole contribution to the festive atmosphere in the neighborhood is a sad (but sparkly) wreath on the front door.

This goes against my basic nature. As someone with a Christmas Eve birthday, I feel it is my duty to fully represent the holiday, and consequently, I want a house so decorated with lights you can see it from space. But apparently, it's not meant to be.

So I've moved on to other things.

Last year, I went to Sam's preschool class and taught all the kids how to make poinsettia napkin rings. They look like this: 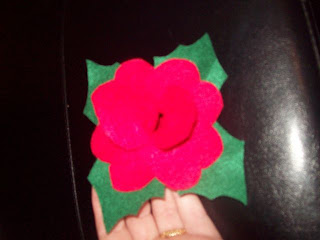 What are you doing to prepare for the holidays?
Posted by Unknown at 7:25 AM