I really hemmed and hawed about getting tickets to see The Wiggles live. The boys watch their Wiggles videos﻿ every day, and absolutely LOVE everything about The Wiggles right now, but the closest show was in Boston (three hours away), the tickets weren't cheap, and when you're talking about toddlers + live theater, the likelihood that they'll actually sit in their seats and watch the show is practically nil.
And add to my concerns the fact that at Six Flags Great Escape, they have Wiggles World with a little Wiggles stage show, and when we went this past summer, Sam was absolutely terrified by the whole thing, refused to sit anywhere near the stage, and acted completely traumatized by the experience. (This might have had something to do with the teenage girl singing lead, and the dripping-with-apathy-teenage boy Captain Feathersword. Note to people impersonating The Wiggles--The real Wiggles don't have to fake enthusium for little kids. Either love what you do and love the kids you're doing it for, or find another line of work.)
But I digress...
While I had my reservations, I am willing to give my boys the opportunity to surprise me. Hope springs eternal, right? This could be the day that they both sit calmly in their car seats for 7+ hours round trip, attend to and thoroughly enoy a once-in-a-lifetime concert, and have a happy memory to enjoy the rest of their lives. So why not at least try? Sam is four, and won't love The Wiggles forever, so better do it now while both boys are into them. So I bit the bullet, got the tickets, Tom took a day off work, and we went to see the show.
Totally worth it. In fact, more than worth it. We all had a fantastic time (even during the car ride--thank you PBS for the brand new Dinosaur Train DVD!). It was everything I'd hoped for in my wildest best-case-scenario dreams. The theater was sold out, and at least half to three quarters filled with toddlers. Excited toddlers. Almost-as-big-as-Christmas excited toddlers. And yet our children and all the children as far as the eye could see sat waiting as patiently as they could for the concert to start. And once it did, the children were gripped by the action on stage. I didn't even know toddlers were capable of that kind of attention span. And it was a fairly long concert. About an hour and half. John, who is prone to running laps around any movie theater I have the poor-judgement of bringing him to, made it through the entire concert with only one warning from me. When I threatened to take him out of the theater, he immediately sat back down and re-focused on the show.

In retrospect, the price of admission was more than fair. The Wiggles deserve every penny they make because they work hard to put on a great show--they're constantly singing, dancing, playing instruments, doing acrobatics, running around in silly costumes, waving at and engaging the kids. And they've been at it for 20 years, so the fact that they're not burnt out, going through the motions, and bored silly singing the same old songs speaks volumes about how much they truly care about their audience and don't take for granted how important they are to the children who love them.

For anyone curious, they really mixed up the music in this concert. There were some old favorites, some new songs we hadn't even heard yet, an Aboriginal lullabye complete with diggeridoo, and for the parents--a little Gloria Gaynor and Van Halen. :-) 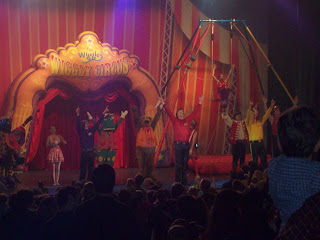 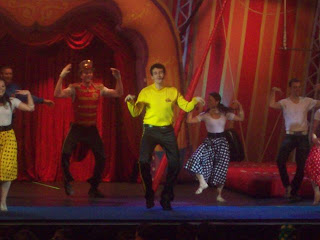 This is Sam, the Yellow Wiggle. We had good seats, pretty much right in the middle of the theater, near the left aisle. If you're going to a Wiggles concert, sit on the aisle if you can. More about that in a minute... 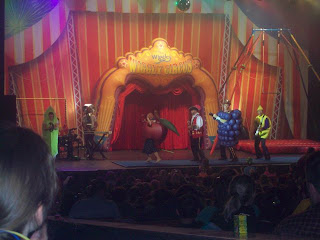 Here are some of the silly costumes The Wiggles wore. Here they're all dressed up as fruit (and a spoon). 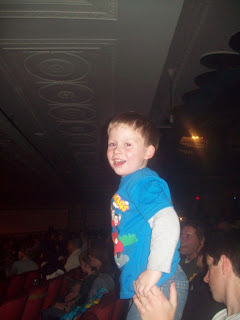 Obviously, Sam did not have a nervous breakdown watching the real Wiggles. 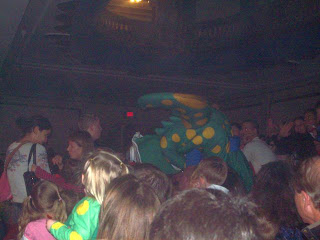 Anthony the Blue Wiggle also has a great sense of humor. Here he is carrying Dorothy the Dinosaur around the theater. The Wiggles are wonderful about coming out into the audience so the children can see them up close. 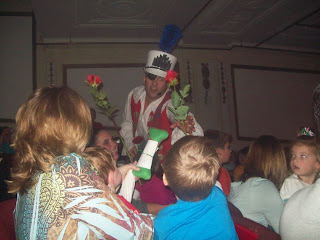 Before we went to the concert, I researched what we needed to bring with us. I already knew from our live  Big, Big Show DVD that they collect roses for Dorothy and bones for Wags at the show. The Wiggly dancers, some of the Wiggles, and Captain Feathersword go out in the audience to take them from the children, so if you want to see a Wiggle close up, get an aisle seat, and brings roses and bones. (Incidentally, I read on a message board that the roses (real and silk) are donated to nursing homes.) Plus if your child brings a sign, there's a time during the concert where they stop and read everyone's sign. I was going to make a sign, but Tom talked me out of it because we had to walk about 1/2 mile from the parking garage to the theater and our hands were already going to be full. So, before we left, I whipped up a couple of polar fleece bones for Wags and bought some roses for Dorothy. We were sitting just two seats in from the aisle, and as it turned out, Captain Feathsword was collecting in our section, so Sam and John got to hand him our roses and bones. So cool!

And since Captain Feathersword is my favorite, it totally made Mommy's concert!
Posted by Unknown at 8:09 AM