I don't like Election Day for the reasons you might expect. Actually, the reason I like it so much is that, more than any other day, it makes me feel close to my great-grandmother, who passed away in 2004 at the age of 103 (and she was about a month shy of 104!). 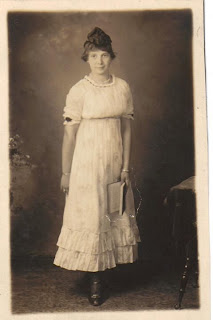 The 19th Amendment giving women the right to vote passed in August of 1920, when my great-grandmother was 18 years old. She never talked about this momentous occassion, but she always voted. Even when she was in her hundreds, was almost completely blind, and could barely walk, she voted.

I clearly remember going to the polls with my mother when I was little, and sometimes I went with my grandmother and great-grandmother, too. Not once did any of my family members complain about the lines, or the cold, or the time they were taking out of their day. On Election Day, that's what you did.

And when I was old enough to vote, I voted. Automatically. Like breathing.

I do it for the women who came before who had no voice. And I do it for Mama, who showed me how to use mine.
Posted by Unknown at 6:56 AM