Tom and I got home last night from our weekend away in Salem. I needed the break. It was wonderful to be able to get away for a weekend by ourselves. We needed a chance to have each other's undivided attention--something I don't think we realized was lacking in our relationship until we actually had it again. I'm glad I had it (albeit briefly), but I was ready to come back to our divided life and the boys again.

I have real mixed feelings about Salem. On the one hand, I love a good ghost story. I'm interested in the idea of spirits and spirit communication. I think psychics and witches are fascinating. I love a good tarot card reading like every other good new-agey wierdo. I love costumes and theatrics, and quirky tourist-y silliness too, and Salem had all of that and then some. It was Halloween Gone Wild. Like the Renassaisance Faire went Goth for a month. Which ordinarily I would love...

But I also love history, and I appreciate historical accuracy. So it also made me a little sick that twenty completely innocent people and two dogs were put to death for practicing withcraft in the very same town where you can now buy fifteen different kinds of pointy witch hats, t-shirts of black cats made of sparkly pentagrams, and get a tarot card reading or sit in on a seance every two store fronts.

It would be one thing if the accused witches had actually been witches--then the over-the-top celebration of all things dark and occult and mysterious would make some sense. It would be a gigantic F-YOU to the Puritans, embracing the past and a practice that was meaningful to people who died being true to themselves. But what is going on in Salem now, while fun, feels a bit like a slap in the face to those people who died protesting the very thing that now makes the town a tourist destination.

It gives me the same uncomfortable feeling I have in zoos, where I'm forced to weigh whether it is worse to hold an animal captive to educate people about its breed, or leave the breed to eventual extinction because of human apathy. The Witch Trials brings Salem to mind, but without the party atmosphere, people might never visit and therefore, would never get the complete picture of what happened there.

With that in mind, Tom and I tried to experience both sides of Salem while we were there.

The Bizarre Bazaar just happened to be right across the street from our hotel (The Hawthorne) this past weekend. It was a huge street fair, with every kind of imaginable thing to buy or eat or see. So we checked that out for a while. 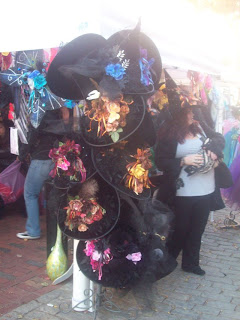 Pointy Witch Hats At The Biz Baz
As we were walking down Essex street looking at the Biz Baz, we came upon the 40 Whacks Museum and I just had to go inside. The whole Lizzie Borden story is fascinating, and after seeing the exhibits and reading all the information on display, I can honestly say I have no clue if she did it or not.﻿
Then we walked down to the wharves. First to see The Friendship, a recreation of a colonial merchant vessel: 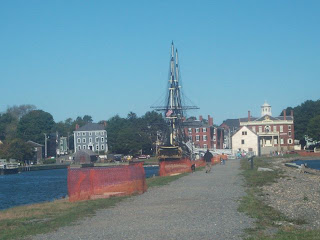 And then on to Pickering Wharf to check out the really cool shops there.

We stopped for lunch at a little Polish cafe in the mall downtown, where I had stuffed cabbage (Eastern European-style) for the first time since I was last in Hungary. Oh they were mouthwateringly good! Authentic... perfect... delicious. Apparently, there is a substantial Polish population in Salem these days, which is an unexpected little discovery we made.

After lunch, we made reservations to go on a ghost walk that evening, returned to our hotel to exchange coats for sweaters (it was a balmy 60 F by mid afternoon), and then headed back out for more sight-seeing. We saw the old cemetary, as well as the Salem Victims' Memorial there, and after that I convinced Tom to go to The Witches Cottage for a thirty minute theatrical performance where they used 3-D effects to (attempt to) scare the crap out of you. We watched the show with a bunch of squealing/shrieking teenage girls, so it was actually funny rather than a scary. I liked the fact that they covered both the fantastical and the historical elements at play in Salem. It was really cool.

﻿
Our ghost walk was really great. I make it a point to go on a ghost walk in any city I visit that has on. I took this picture of the graveyard where Giles Corey was pressed to death (a beautiful place with such a sad history)--we were told he appears to people whenever Salem is about to experience a great tragedy. 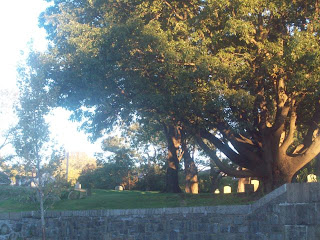 I'm not saying this is anything to get excited about, but there is a wierd light anomaly in the bottom middle of the picture--under the tree in the center of the picture and above the stone wall--it looks like a grey patch. I blew it up on my computer and it looked like a face. But then again, people see Elvis in their burnt toast....

After the ghost walk, Tom and I went back to Pickering Wharf for dinner. Since the wait time was substantially shorter for (idiotic) people who were willing to sit outside, we ended up sitting in 40 F night air, on a dark, candlelit patio, overlooking the  dark harbor. Obviously there weren't too many takers on the sitting outside option, so it was private, quiet, and actually quite romantic.

The next morning we got up early and went in search of breakfast. We found the Gulu Gulu Cafe at the end of Essex Street and decided to try it out. (What's not to love about pop art pooches on the windows?) 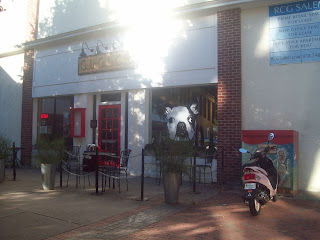 ﻿
It was a great cafe with a hip, whimsical, artsy, European vibe. Definetely my kind of place. I had a Creme Brulee Latte that was to die for. One of the biggest surprises of the trip was how many Euro-style cafes and restaurants you could find. While I didn't love all the witch-guilt I was feeling, between the stuffed cabbage and the fun little coffee houses, I was a big fan of its cultural diversity.
After breakfast, we went to The Willows in search of Mahi Cruises, to see if we could get on one of their sightseeing boats. The Willows is beautiful, as evidenced by the photos I took at the pier: 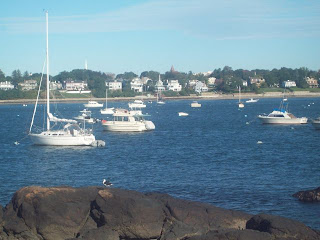 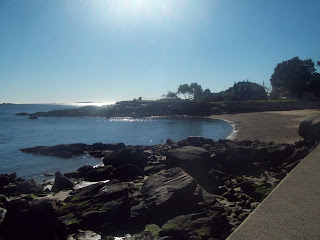 But the cruise was not to be. They were actually selling tickets at Pickering Wharf, and once we got there, they were sold out.

So we got on the road and headed up to my friend Miranda's house in Groton, where we spent a really enjoyable afternoon together.

I definetely would like to go to Salem again. In retrospect, I wish we had done some of the more historic activities available--like watching Cry Innocent, an interactive performance where Bridget Bishop is on trial and the audience is the jury, and Spiritways: A Night in Beseiged Salem Village, which is described as: an unsettling night-time immersion into the world of the infamous "afflicted girls." Outdoors, in the woods and in the historic structures of Pioneer Village, Forest River Park. I think when I'm visiting a place for the first time, I tend to do what's easy and uncomplicated. The more accustomed to things I become, the more willing I am to take some risks. If I went again, I think I'd want to focus on the darker, historical, more tragic aspects of Salem. And I'd want to take the boys (when they're older), so that they could learn about and from them, too.