So after reading this blog on Studio Mothers, I rather impetuously decided to sign myself up for this online art playgroup. I wasn't sure how it was going to go, but Sam's school doesn't start until September 13th and I wanted us to have something special to do together during these last few weeks of summer.

Sam is what I would call reluctantly artistic. When he's asked to do art projects, he'll comply and do a great job, but it's not like he clamors to do it. He loves to play with trains and other wheeled vehicles, and would happily do that all day, every day without interruption. So I was pretty sure that this was going to be one of those activities I would have Sam do, because it was character building, and not because he'd find it particularly fun.

I hate to say it, but I was right. At least with this particular project. This task involved taking and picking out pictures (which Sam did seem to enjoy somewhat), followed by some painting (he did this dutifully), and ending with some gluing (he'd completely lost interest by this point). The only reason I hung on to his attention for as long as I did was because once I'd read over the instructions, I decided to modify them. Instead of printing pictures of umbrellas, balloons, and seashells on the painted pages, I printed out pictures of cars to color and had Sam paint them. We'd also gotten a huge stack of old (late '40s, early '50s) train magazines, so Sam selected a few engines he wanted to work with, and we cut them out and painted them as well.

After this point, he lost interest quickly, so I finished up the gluing. Here's the finished project: 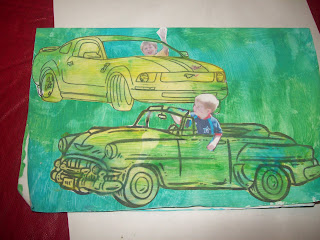 Yesterday, it just so happened that the boys' great-grandmother sent them a big box of toy cars, so I thought this would make a cute thank-you card for her. 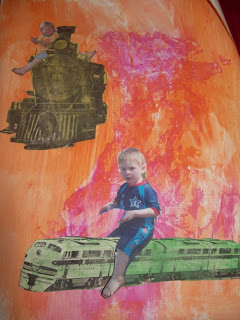 Since the boys are so crazy about trains, I thought this would be a funny thing to do with their pictures.
(John actually painted the background on this one. It was all he managed before he lost interest.) 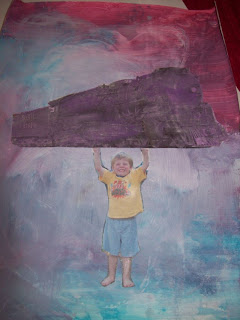 All in all, I think the art we produced turned out great. There was just a general lack of enthusiasm for the project. (But I can't say I'm too gung-ho about mixed media myself.) We all have different interests and different passions, so maybe next week's project will go a little better.
Posted by Unknown at 12:25 PM