A New Way To Organize My Coupons 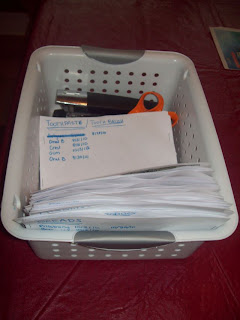 So it's been an eternity since I posted a new blog. I have a good excuse. We moved. We're still unpacking. Everything is nuts. If it weren't for my sporadic Facebook updates, I'm pretty sure my friends would think I was lost in the Black Hole of Calcutta.

But things are slowly coming together and now I'm trying to organize all the things that are still in a mad just-shove-it-somewhere-out-of-sight post-moving jumble. 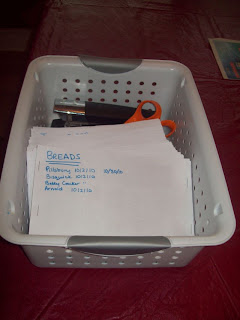 The first thing I've tackled is my coupons, because it seemed like the most manageable thing on my plate at the moment. That, and my friend Ruth, who writes a blog on couponing and saving money in general, has really inspired me with the amazing haul she's bringing in courtesy of a few little scraps of paper. You can read her blog, Living Well, Spending Less here.

I tried to use coupons in the past with mixed results. I alternated between a coupon accordian file and a big binder with clear pages, and I was still not always finding the ones I needed, mostly because they were always in a jumble, and it took me forever to go through them all, matching what I had to the gazillion products for sale in the Sunday fliers. I would like to save money AND have a life, thank you.

I decided to try a new tack this go round, and in the spirit of *not* spending any money, went scavaging around in the basement to see what we already had on hand. I found a little white storage basket that seemed like a good option. At first I thought I'd repurpose some of the moving boxes we've also got down there and make a bunch of dividers for the coupons, but then I realized that the coupons were never going to stay in their neatly organized sections, so I decided folders would ultimately be the better solution. I took some printer paper, folded it in half, stapled up the sides, gave it a header (Cereal, Dairy Products, Frozen Food, Snacks, etc) and when I put a coupon in, I write the brand and the expiration date on the outside. It looks like this:


When I take a coupon out, or it expires, I simply cross it out. The beauty of this system is that I can add and subtract coupons until I run out of room, and when that happens, I can just make myself a new folder. When I tried this system out this past week, I was able to find the coupons I needed easily and saved about 50% on my grocery bill.

Also, I have a major clutter problem, so I keep scissors, the stapler, extra staples, my marker, and all the Sunday fliers in the back. 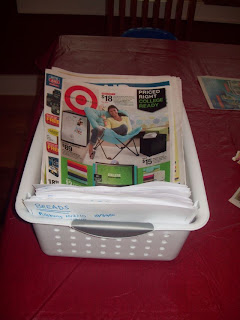 If the rest of my organizing goes so well, I'll be in really good shape!

You can read about some tweaks I made to this system here.
Posted by Unknown at 12:35 PM