I wish I could tell you all the exciting things that have been happening around here lately, but unfortunately, I can't.
What I will bore you to tears tell you about is my latest consignment sale find. It's no secret that my boys like trains, or that Sam can find a picture of Thomas the Tank Engine the size of a postage stamp in a store as big as Wal-mart. But I hadn't realized how good I was at locating trains myself.
I was at the consignment sale the other night and wandered over to the bedroom decor area. Shoved between a wall and a shelving unit, I thought I spied a little blue smokestack. I wrenched the picture from its hiding place and Eureka! It was the perfect thing for John's new bedroom: 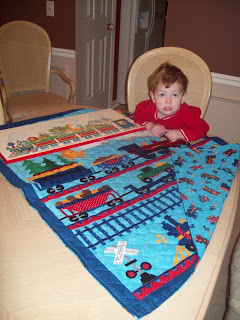 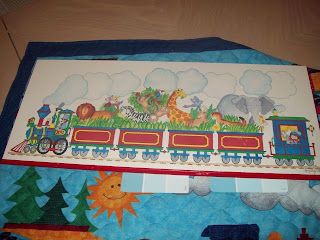 People that do not have children will probably not understand my euphoria, but at that moment, I felt like I had just saved the planet from a group of giant maniacle robots, scaled Mt. Everest, and founded the first colony in outer space. At a measly $8, it was absolutely the most PERFECT FIND in the world at that very moment.

And I should know, because I'm on a constant, and constantly fruitless, search for perfection.

Tom and I had a heated argument discussion the other day about my insistant need to create charming, train-themed bedrooms for the boys. It all began over a $160 comforter, that Tom insisted I would be out of my mind to give to a 3 year old boy. Okay... maybe so. He said his bedroom didn't have a theme when he was growing up, and he had the same boring solid-colored comforter most of his life, and made it to adulthood emotionally unscathed.

Well, goody for him.

When I was little, I had a Strawberry Shortcake obsession akin to Sam's for trains. And my bedroom was an explosion of every imaginable Strawberry Shortcake paraphenalia known to mankind, and even more things unknown to mankind that my mother had made me. I had Strawberry Shortcake sheets, curtains, comforter, canopy for my bed, pillow cases, throw pillows, rugs, jewelry, hair bows, t-shirts, shoes, backpack, etc. And it made me ecstatically happy. I was maybe 4 at the time, at an age where I was starting to have definite likes and dislikes, at an age when I was becoming my own person, and the more I was surrounded by the things *I* liked, the better loved and understood I felt.

I'm sure without those things, I would have made it to adulthood without the need of a good therapist, but all the same, I look at that time in my life as a very magical period, where I lived in the same world that my imagination had conjured.

I still get that feeling when I'm writing--when I'm literally living only in the world created by my own head. I block everything else out and it's as close to perfect as I've ever felt. I'm probably telling on myself here, since most people don't clamor to hide inside their own heads, but maybe it's a trait common among writers. I was reading about J.D. Salinger and his near hermit-like existance in rural New England, and it sounded like a pretty good life to me, too.

I want to create that kind of emotional retreat for my boys, even if they aren't like me and won't see their private space in the same way I would, because my personal philosphy as a parent (and, for that matter, as a human) is to open yourself (and your kids) up to everything, throw ideas at yourself (and your kids) like errant Velco balls, and see what sticks. I know well enough from my writing that you only need a split second experience to change an entire course of action. Lots of experiences give you lots of choices. And the more time your mind is allowed to wander, the more courses of action it can explore.

Which brings me back to my writing... as always.

As I mentioned in my last post, I've been reading Our Southern Highlanders by Horace Kephart. I've been living up in Bear Wallow (at least in my head) for months now. It's been a blurry visit because I don't have all the details ironed out yet, but reading the book has certainly helped inform my mental picture (although it was written about the mountaineers that lived further north of Bear Wallow, where it was more isolated and poorer than the particular area I'm writing about). Anyway, yesterday I sat down and started transcribing my notes into a Word document. I wasn't consciously plotting my novel. I was just writing down snippets of interesting information and letting my imagination mull over them a little. And I came across mention of a "poke supper," where girls prepared delicacies for fund raisers, and young men would bid on them--sometimes bidding up to $50 for a pretty girl's "poke"--because the winner got to eat dinner with the girl who prepared the meal and then escort her home. So my mind was turning...hmmmmm... and then this morning, while I was fixing breakfast for the boys, a new plot thread snapped into place.

I don't want to jinx anything by throwing the word "perfect" around too much, but it seems to me that this book, at this moment, is another PERFECT FIND.
Posted by Unknown at 8:02 AM