It's been a while since I posted new pictures of the boys. They're going through a very feral developmental stage right now--I could use analogies like maurauding pirates, rampaging wildebeasts, viking berserkers, etc to describe them. They're in a spitting/screaming/hopping/jumping/pillaging frame of mind with VERY selective hearing lately. And, as usual, I'm wondering what on earth I was thinking having them so close together.
John is well-into the Terrible Two's now--tantruming and screaming and head-butting when he doesn't get his way. And since his older brother is around to show him how to get into all kinds of trouble he wouldn't have come up with on his own, he's spending a lot of time tantruming and screaming and headbutting at me. And Sam is spending a lot of time in time out. So Sam has also started putting John in "time out," but that's a whole nother story...
At least they look angelic in photographs... 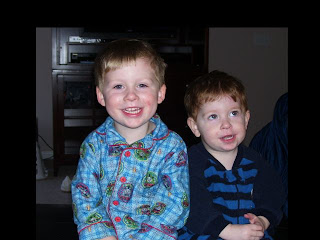 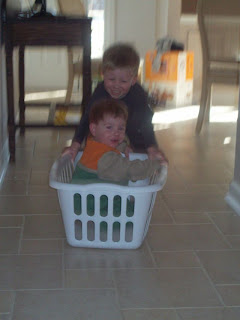 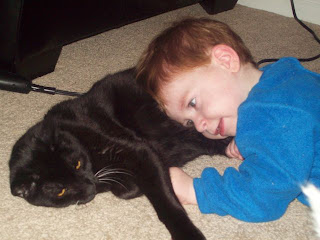 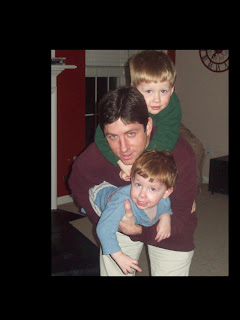 Anyway in honor of my marauding wildebeast berserkers, since it's February 9th, here are nine fun facts about the boys.

1. They have discovered the joys of hair styling... with maple syrup... on school mornings.

2. Yesterday I had the following conversation with Sam on the way home from school: "Mommy, stop singing." "I'm not singing, Sam." "Mommy, stop (mimes me lip synching). Just drive!"

3. John has learned the words "yucky" and "yummy". Poopy diapers and bread crusts are "yucky." Trains and french toast sticks are "yummy."

4. John loves watching The Wiggles and calls them the "gulls".

5. Sam has started "reading" books to John. John will bring him books and they'll sit together and Sam will narrate the pictures for him.

6.  John has figured out where I keep the Chef Boyardee in the pantry, and will go and get a can and stick it on the counter for me in the morning, so it's ready for lunchtime.

7. He has also started bringing me towels (completely unasked) when I'm in the shower... sometimes as many as three. :-)

8. John's eyes have officially turned green. I know it shouldn't matter to me, but I am soooo happy about it. They're the most gorgeous shade of turquoise. Not my dark green color at all, but more like my grandfather's, and that suits me fine.

9. Today, the boys were in Sam's room playing with the door shut. I went to check on them and said "If you need me, I'll be downstairs cooking dinner." Sam got up and said "Thanks, Mom" and then closed the door in my face like "We're good here."