I call the boys by a variety of strange pet names. There's "squash possum," and "poo possum," pumpkin poo" and "poo chicken..." I could go on, but I've probably embarrassed myself enough already.:-)

I'm always coming up with variations on this theme, and so far, neither of the boys has been psychologically scarred by their mother's, shall we say, creative use of pet names. I do it so automatically, and with such variation, that I really don't think about what endearments are coming out of my mouth anymore.

But the other day, I was tickling the boys and blowing raspberries on their stomachs and mentioned how delicious they were and how I was going to eat them up. They were both laughing and shrieking with delight, and to be honest, I didn't think they were really listening to me when I said, "I have two yummy boys." But Sam was, and has begun to repeat this back to me.

"Mommy has two yummy boys," he'll grin. "Two yummy boys!" As if this was the greatest compliment in all the world. And maybe it is.

I will admit that the clouds have parted and life with the boys is more delightful and more fun than I could ever have predicted. I still have to referee squabbles and wrestling matches, but overall, our little family dynamic has morphed into a wonderful, if slightly exhausting and roughshod, thing.

So in honor of my Two Yummy Boys, I am posting some recent pictures (taken yesterday over the course of Sam's third year birthday celebration) and a new list of 10 fascinating tidbits about them and their yumminess. 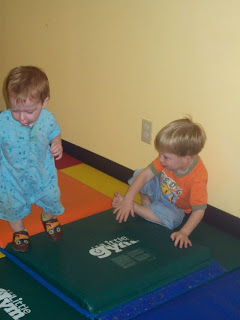 Here are the boys playing together at The Little Gym. Sam didn't even want to participate if John couldn't come in too. When John snuck into the class while I was taking pictures, Sam left his activity to come play with him instead. 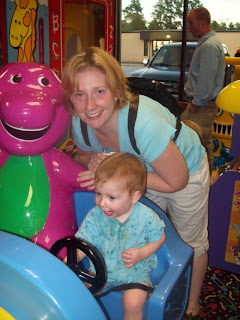 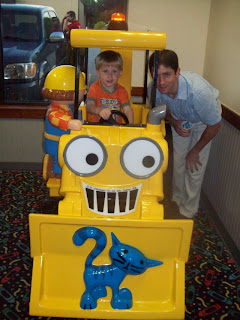 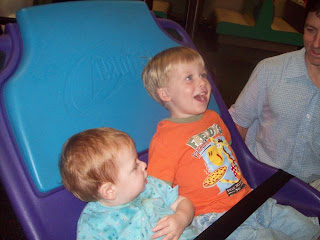 The boys taking a ride together.

Ten Yummy Tidbits About The Boys

1. John shakes his head "no" when he means "yes." It took me a while to figure this out, but once I did, it's been amazing how much he communicates to me. He'll head butt to express displeasure, and then it's a matter of asking the right question, "Are you hungry?" "Do you need a nap?" "Do you need a sippy?" and looking for the head shake.

2. Sam has very strong opinions about his appearance. I've written before about his fashion sense and the first time he helped me pick out his clothes. Now he also has opinions about his hair. When I experimented with the dog clippers (yes, I know, I'm a horrible mother) even though it wasn't too too bad, he referred to it as "boo boo hair." Today I took him for a back-to-school haircut and had the girl shave it short everywhere to accommodate Mommy's hack job. When she was finished I asked Sam what he thought and he gave me the sad-puppy-dog-pouty-lip and called it "boo boo hair" again.

4. I forgot to mention, Sam is also obsessed with shoes. He was so excited when I came home with my haul from the consignment sale. He had to try every single pair on. He also loves to put mine and Tom's shoes on and walk around the house. If he finds socks, he'll put those on too, even when they look like hip waders on him.

5. John is turning into Mr. Nautical. The first time we went swimming, it was all I could do to hold onto him. He had no fear of the water and was ready to take off. Sam tends to occupy the DVD player with Thomas videos (and lately a free Huggies potty training DVD we got) but John was so determined to watch Finding Nemo that he taught himself how to work the DVD player and put it on himself.

6. When we retire his crib bedding, I want to create a Jungle Cruise-themed bedroom for John a la the ride at Disney World. I'd like to build/find a boat bow-shaped toy box/bench seat, and put our captain's wheel mirror over it, along with a little striped boat canapy, and decorate his room with jungle greens and safari-type animals.

7. Because of Sam, our entire family has gotten really into trains. I love looking at them and listening to them now. My grandparents' house had a train track that ran along an embankment in their backyard and when I was little I loved hearing the train rumble by. I'm rediscovering that love now.

8. Sam has discovered that cats have pullable tails. This has not pleased our cats.

9. John's eyes are a most unusual color. Grey/turqoise, they go from green to gray, with caramel bordering the pupil. My eyes are dark green with the caramel, and I keep hoping his eyes end up green.

10. The boys start school on the 24th, and even though I love my free time, I am going to miss these lazy summer days together.
Posted by Unknown at 11:11 AM