If it seems like I've been quiet of late, it's because I was feverishly preparing for my brother-in-law Dan's wedding. In addition to making 100 daffodil-themed favors, I also embroidered his new wife, Kelly, a daffodil-themed tablecloth(they're her favorite flowers).

This was a lot easier said than done, and not only because of the embroidering itself. I learned to embroider in Hungary, where there are traditional flower patterns embroidered in tranditional colors. Since daffodils are everywhere, I figured I could just look online for the daffodil pattern and go nuts. But no. There were no daffodil patterns to be had. I even went so far as to look up the Hungarian word for "daffodil" (which I didn't know offhand) and did a search on Hungarian search engines. No luck. I emailed my Hungarian friend, Dora, and said "Why can't I find a daffodil pattern?" Apparently, Hungarians don't embroider daffodils. (And yet they do embroider paprika and wheat???) Since she's currently living in Munich, she offered to look there and see what she could find. She came through for me and sent me the pattern for a beautiful daffodil-themed tablecloth, and it fortuitously was covered in lavendar. By a happy coincidence, Kelly's wedding colors were yellow and lavendar. Perfect! 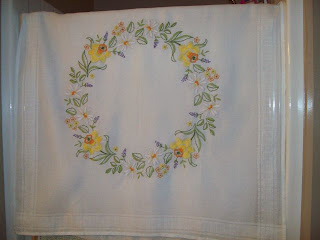 So, anyway, for the last month and a half, I have been an embroidering fool, trying to get the tablecloth finished in time for the wedding. I couldn't mention it online because the post would've shown up on Facebook and ruined the surprise... So I seemed to be in hermit mode, when I really wasn't. 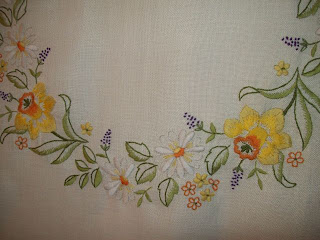 I finished the tablecloth at the end of June, and am really pleased with how it turned out considering that before I started, my embroidery skills were limited to the satin and stem stiches (the main stitches in the Kalocsa style of Hungarian embroidery I learned). This tablecloth had those stitches, in addition to the lazy daisy stitch, long and short stitch, and french knots--all of which I had to teach myself on the fly! I discovered that there are a plethora of helpful internet tutorials and by using them managed to do a fairly adequate job even though I'd never attempted those stiches before and they scared the you-know-what out of me! I was sure I was going to ruin a patch of fabric at some point from sewing in and then ripping out again. 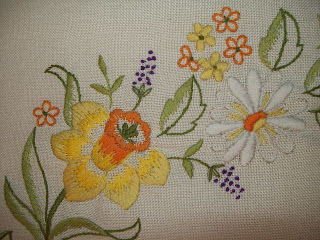 I was really surprised (and pleased) that Kelly and Dan liked the tablecloth so much that they included it in their ceremony. It covered the table with the unity candle on it, and looked really beautiful, even if I do say so myself. 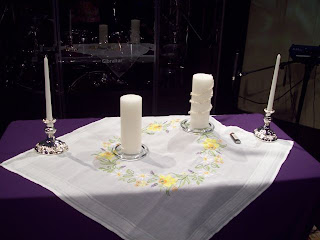 When you hand sew something for someone (especially now, when most people don't value handcrafts as much as they once did), you always wonder if it's going to be put to use or just get stuck in a drawer somewhere. It's gratifying to know that the things you make are appreciated and can be used and enjoyed. 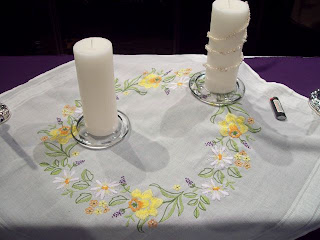 If I can expand on the idea and become metaphorical, it's much like writing a novel. (It seems like everything in my life leads back to my novel in some way...)After submitting the first chapter of my novel to a publisher, they've requested to see the full manuscript. Hopefully it will be used and enjoyed too.
Posted by Unknown at 7:57 AM