I don't remember where I read it, but it was surely in some parenting magazine or book of child-rearing advice. It said that when you have a son, there will come a time, when he is a toddler, that you (the mother) will become, in essence, chopped liver. During this phase of his life, all things will revolve around Daddy. Mommy will be passe.

I read this passage to Tom at the time, and I recall him saying something to the effect of "Yeah, right."

But it is true, and Sam has reached that phase.

His love of all things Daddy is in stark contrast to John, who whimpers whenever Tom holds him, and wants Mommy's endless attention and minstrations. I suppose that's why I'm suddenly so aware of this change in Sam, because once, not too long ago, he acted just like John.

Tom works crazy long hours. This shouldn't come as a surprise to anyone who knows us. He typically leaves the house at 7am and isn't back through the door until 7:30 or 8pm most nights. I hate it. Sam hates it more. Lately, starting at about 4pm, Sam'll begin asking "Daddy come home soon?" and keep asking me every ten minutes until Daddy does, in fact, come home. He's learned to say "I miss you" in the last week, and lately I'vd heard him while he plays with his trains saying "Daddy, I miss you. I miss you. Sam misses Daddy. Daddy come home soon."

On the weekends, Tom is often too busy to play--working on home improvement projects (yep, still at it), finishing up household chores, running errands. I feel for Sam because it seems like he spends so much of his time waiting to be with his Dad. It should be easier to spend time together 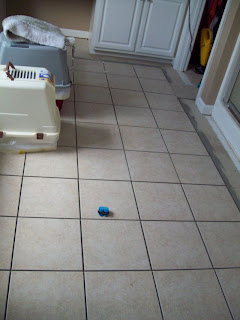 This weekend, Tom started tiling our master bathroom. I encouraged Sam to set up his train sets on the carpet in our bedroom, so he could play while Tom worked. Tom was surprised at how happy Sam was just to sit beside him and play. He'd envisioned all kinds of apocalyptic scenarios where Sam would try to ingest the mortar or throw a tile against the wall, and none of it happened. Sam was extremely well-behaved even though he wanted to help so badly he could barely stand it.

This morning, Tom left for work before Sam woke up. Later I was sitting in the bed, feeding John, while Sam played on the new tile in the bathroom. I wasn't paying a lot of attention to what he was doing. It wasn't until I went in the closet to get dressed that I saw what he'd done. 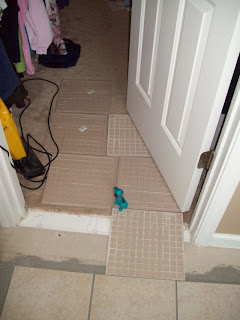 As a writer, I see metaphors everywhere, and this one stood out to me immediately. This was one little boy's way of connecting with his Dad.
Posted by Unknown at 10:58 AM