Roatan was my favorite port by a mile. It's not the typical cruise destination, as it's still very poor and undeveloped for the most part. That was what I loved about it. After a day in duty-free-Cayman-Island hell, which felt like a high-end tourist trap, it was nice to spend a day in the real world. Especially the real world of dense jungles and mountains. The poverty was shocking by American standards, but the people and their lifestyle was beautiful and dignified because they were making do with what they had with no apologies. The people were exceedingly courteous, thoughtful, and friendly. It was just the sort of place I'd like to create a writing retreat. Someday I hope I have the money to do it, because something about that island really spoke to my soul.

We booked a shore excursion to Gumbalimba Park, and took a bus ride from the port into the mountains. I wish I'd been able to take pictures along the way, but Tom and I were both holding a sleeping boy. But it was a lush and green and beautiful place.

Gumbalimba Park (http://www.gumbalimbapark.com/) is home to some friendly parrots and spider monkeys. Since Sam is such an animal lover, I thought he wold really enjoy getting to see them. When we first booked this cruise, this was the one shore excursion I definetely wanted to take, but then I read some reviews that made me question its appropriateness for children. I was picturing scratching, biting monkeys and beng covered in parrot droppings, and we went back and forth about whether to book it or not. In the end, we decided to do it, motly because I felt like I would always regret it if we didn't. I love monkeys--always have--and how many people actually get to touch one in their lives? It was an opportunity I didn't want the boys to pass up.

Our tour began with a trip through some man-made caves and some information on Roatan's early history, especially pertaining to piracy. Luckily Sam slept through all of this because standing in a small cave, in the heat, listening to a tour guide is not high on his list of life's to-dos. The fact that he stayed asleep was a miracle, sice we were hauling his umbrella stroller up flights of stairs and through the jungle. We were told more than once on this trip how adventurous and brave we were to take small children the places we did. Mostly this was feasible because of the two umbrella strollers we brought. Anything bigger (especially the giganormous double stroller we left at home) would have been totally impossible. Sam woke up right as we arrived at the parrot cages. Pefect timing! He was totally fascinated with the birds, who were the most vivid shades of red and green I'd ever seen. 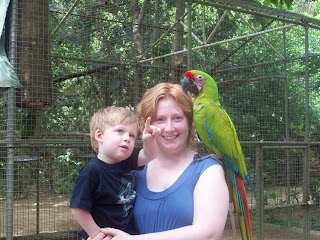 Next we went to visit the monkeys. One in particular, a six month old spider monkey, took a particular liking to Sam and sat with him in his stroller for a long time. In a sudden burst of maturity and impulse control, Sam actually listened to me when I told him he was not permitted to give the monkey a big hug and he behaved himself perfectly. More than anything, I'm sure he was shocked that there was a monkey on his lap. 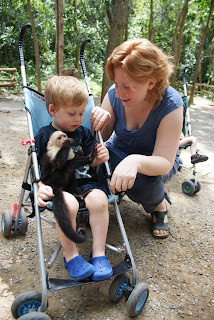 The monkey wasn't as interested in me and quickly moved on. As a group, the monkeys were highly entertaining, stealing people's hats and sunglasses and hanging them impossibly high in the tree branches, never to be seen again. Ordinarily, thi would piss you off, but it's hard to be mad when it's an impish little monkey wearing your stolen sun hat. I heard that in a previous tour, they'd stolen one man's cigarettes, distributed the pack amongst each other, tried to smoke them, and the rained tobacco on the people below. Seeing them was the highlight of our week. 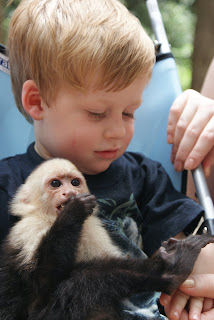