Happy Mother's Day to Me

So yesterday, Tom says to me, "I feel really bad, but I didn't get you anything for Mother's Day... not even a card." And in my head, I have two simultaneous pieces of internal dialogue.

Dialogue 1: You bastard. It's Friday. Don't try to cop out two days before. That's pathetic and lame. You have two days to pull something together. *I* could pull something together in 2 minutes. I think 2 days is plenty of time to buy a damn greeting card. And, ironically enough, in the VERY SAME PLACE they sell greeting cards, you can EVEN get bouquets of flowers. Imagine that...

Dialogue 2: Whatever. Buy me flowers, they'll die. Buy me a card, it'll be nice for a few minutes, then head to the county landfill. The boys are too young to come up with something themselves and you did endure a little operation without the benefit of lidocaine for me, plus you got up early this morning, planted three butterfly bushes in the front yard, mowed the lawn, took carpet remnants to the landfill, kept the boys occupied so I could sleep in, and are in the parenthood trenches with me everyday anyway. It's thankless. We both know that. Oh, and I already bought myself a gift anyway... 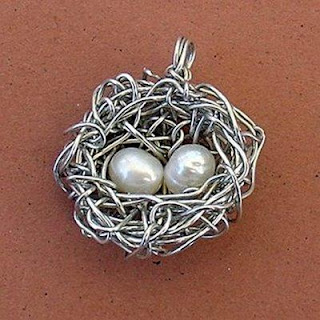 I'd been eyeing this pendant for some time--ever since my Creative Construction friend Jen posted it in her etsy store. http://mamasmagicstudio.etsy.com (Check it out, she's got some seriously cool stuff posted.)

Ever since Sam was born, I'd wanted a cool piece of mother jewelry and just hadn't found the right piece. I was looking for something unusual, whimsical, but classy and just wasn't finding it. Then I saw this bird's nest with pearls representing each of your children and knew that it was the piece I was looking for. Yesterday it was on sale 50% off, and I mentioned it to Tom, hoping he would get the hint, but I got a man grunt in response (translation: why would I pay money so you can wear a bird's nest around your neck?). Existential questions like that would take far too long to answer, so I just went ahead and ordered it for myself.

It would have been nice if Tom's gift giving radar had tuned in to my need for a bird's nest necklace and he had purchased it for me at the first opportunity and then surprised me with it over breakfast in bed on Sunday, but I live in the real world, and am married to a real man, who is sadly not attuned to my need for funky jewelry. That's okay. I won't hold it against him. He's a great dad, and thanks to him, I don't have to do it all myself.

And really, I think Dads often get the short end of the stick when it comes to gratitude. Take Sam's pre-school, for instance. There is no pre-school in session during summer, so for Father's Day, they don't get a special program in their honor like the mother's do. On Thursday, Sam's preschool had a very nice catered brunch for us mothers, plus a concert where our children serendaded us with love songs and then gifted us with hand painted flower pots covered in fingerprint flowers. Earlier in the year, the school had Donuts for Dads day. Fathers were invited to bring their children to school, and in return, were served donuts and juice in the fellowship hall. There was no concert. No love fest (even though the kids were clearly ecstatic to have that time with their dads). It felt like an obvious bribe to get more paternal involvement. Tom has actually started coming home for lunch early and coming with me to pick up Sam because he loves the sight of Sam's lit up face when he enters Sam's classroom. That's a face that's usually reserved for the mothers who pick up in far greater proportion than fathers, so I'm glad Tom has discovered how important these small and seemingly insignificant actions are to Sam (and someday John).

For that reason I feel a little sad that Tom has been left out of all the sentimental Mother's Day celebration. Both of us endured two cooped up children on a cruise ship for a week, and collectively very nearly lost our minds after the nine bazillionth time Sam melted down and wanted "a Mommy/Daddy big big hug" for reassurance that even though he was acting like a caged animal, we loved him anyway. But I was the only one who got the litle card with the small red paint handprint and this poem inside:

Sometimes you get discouraged
Because I am so small
And always leave my fingerprints
On furniture and walls.

But every day I'm growing -
I'll be grown some day
And all those tiny handprints
Will surely fade away.

So here's a little handprint
Just so you can recall
Exactly how my fingers looked
When I was very small.

I am not the only one who needed this reminder, and the poem made us both rethink our reactions to the child we (not always affectionately) call Captain Chaos. Yes, he did take an entire roll of toilet paper this morning, wet it in the sink, and fashioned crude animal shapes from it, but you can't knock his creativity, his independence, and his adventurous spirit. He's going to grown up to be a fascinating man someday and Tom and I will feel honored and excited to be his parents then. It's just easy right now to forget that that day will be here before we know it, and we should enjoy his mini-adventures while we're still a part of them.

In the same vein, I was reading older posts on my friend Kelly's blog, and came across her mention of a song called You're Gonna Miss This by Trace Adkins. I looked up the video on You Tube and after I saw it I was a complete boo-hooing, blubbering mess.

Mother's Day isn't about cards, and flowers, and fancy, overpriced brunches once a year. It's about the change that happens when you take on the responsibility of one or more little souls. Like the bird who patiently builds a nest and then waits for her eggs to hatch, Tom and I both take every second as it comes, remembering this won't last forever, and someday our children will spread their wings and take flight.
Posted by Unknown at 2:18 PM