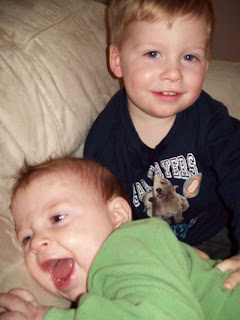 The boys are laying on their stomachs right now, facing each other, blowing raspberries at each other. There is no more beautiful sound to a mother's ear.

No one's screaming, crying, or attempting to break the sound barrier with their shrieking and wailing. Everyone is getting along. Everyone is happy. These moments are short-lived, but they make my day anyway.

I'm sure most people wonder what kind of crack I was smoking to purposefully have two children so close in age, but this is my reason. I was an only child, and I hated every second of it. I hated long car rides, holidays, summer vacations, and any of the other times when I was forced to either hang out with all adults or entertain myself. I wanted desperately what Sam and John have. As I sit here watching them side by side, happily playing with the same busy box, I remember all those times I asked Santa Claus for a sister. It didn't happen, but when the time came, I was bound and determined to have two children as close in age as possible.

Before John came along, I will admit that I thought having a boy and a girl would be absolutely perfect, but in the split second it took to digest the news that Boy #2 was on his way, I realized that the fates were smiling at me. I can't describe it as anything other than magical, but in the same way that twins seem to live and communicate in their own little world, brothers do too.

How else would Sam know to tell us that John wants to swing higher, or is hungry for cheese, and always make sure that John is included in any fun? And how would John know exactly those times when a funny face is all it takes to turn Sad Sam into Happy Sam? I have to keep reminding myself that Sam is only 2.5 and John is only 10 months, because they seem like they've known each other much longer, and the depth of their love much deeper than what I'd expect from two boys so little.

Brother Love is a beautiful thing.
Posted by Unknown at 3:59 AM