Sam and the Squirrels

I took Sam back to the park to feed the squirrels today, and this one didn't disappoint. I think this little guy inherited a daring gene, because he wasn't afraid to venture right up to us for the french fries we offered. (And yes, I know that french fries are not a healthy part of a squirrel's diet. I'll bring nuts next time.) 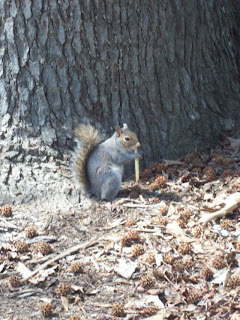 I sat there watching Sam watching the squirrels, and it reminded me of myself when I was two, learning about the natural world from my grandfather. He was an animal lover, and a hunter, two facets of his personality I've never been able to reconcile. I know from firsthand exerience, though, that he went out into the woods to observe the animals a lot more often than he went there to shoot them. And it was from him that I learned how to sit quietly and observe. 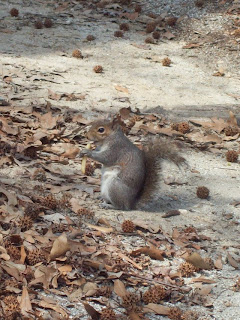 Two-year-old Sam was named after my grandfather Sam, and I see my grandfather in him more and more every day. Sam loves every kind of animal and already wants to know how they're different and how they're the same. First he was obsessed with pandas, then it was seals. Now it's rodents. For the last few weeks, he's been trying to understand the difference between mice, chipmunks, and squirrels. We've spent hours at my laptop, on Google images, clicking from pictures of chipmunks, to squirrels, to mice. Now that he's discovered the movie Lady and the Tramp, where a rat figures heavily into the ending, he's trying to understand where they fall in the phylum, too. 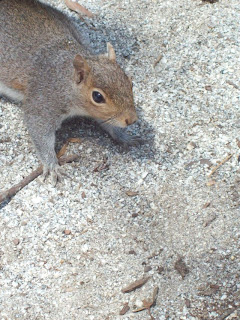 The squirrels in the park are now Sam's "squirrel friends," and it makes me happy to think that Sam feels like he has a relationship with them. My grandfather never had any "squirrel friends." (Which is understandable. I wouldn't be friends with someone who thought I tasted delicious, either.) But Ira, his neighbor across the street, did. Ira had been feeding several generations of the same squirrel family for years, and he'd sit on his back porch and they'd swarm from all directions for the freshly cracked nuts he offered. Even at my very young age, I knew what I was witnessing was extraordinarily uncommon. Squirrel friends are few and far between in this world.