On Christmas morning, we got up early, loaded the boys in the car, and headed up to Asheville. We had a turbo gift-opening session with my aunt and grandmother, lunch at my gandmother's, then off to our flight. Sam was very excited about his first flight., and after we took off, kept pointing out the window and telling Tom, "very high." He was utterly fascinated by the sights out the widow. 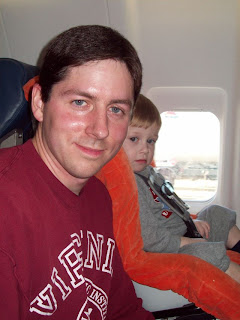 We arrived in Albany at 11pm and went straight to our hotel and to bed. As a cost-cutting measure, we decided not to check any of our luggage, and lugged a rolling suitcase, two backpacks, a purse, Sam in a stroller, John in a sling, and Sam's car seat through three airports. Maybe flying was easier than a 15 hour drive, but I contend that there's no easy way to travel anywhere with a two-year-old and a six month old. 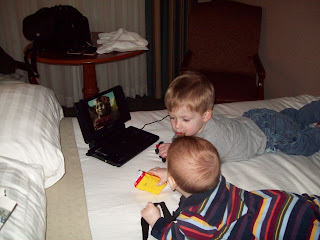 While we were in the hotel, I snapped this picture of the boys watching a Thomas video together. John is crawling now and Sam has (reluctantly) begun to accept the fact that he and John must share pretty much everything now because John wants to do and pay with whatever interests Sam.

After Tom got our rental car and a new car seat for Sam (another cost cutting measure. We were afraid to trust our second carseat to the airline and it was almost cheaper to buy one than check it.) we went to his brother Dan's house. Tom's parents met us there and we had Christmas with them. Dan got me the best Christmas present ever. He sent me, his girlfriend, Kelly, and his mom to a spa to get pedicures, then arranged for a babysitter, and took us all out for Indian food. I told Tom he had a tough act to follow in the future!

On the 27th, Dan and Kelly hosted both sets of families for an after-Christmas party. It was lots of fun. Dan read the boys a great book called Trouble on the Tracks. He also taught Sam how to say "poopie doopie". Unfortunately, it backfired on him, because now Sam calls him "Poopie Poopie!" 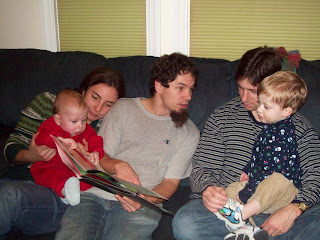 On the 28th, we packed up the rental car and went home with my in-laws to their place in Syracuse. We were treated to a nice snow shower, and took Sam out in it for some fun. Here he's learning to throw snowballs. 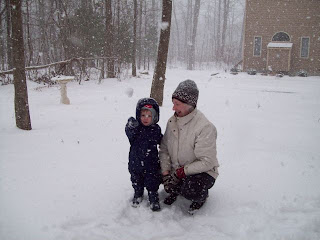 We had a great time experiencing some real winter weather. Today it was 68 degrees here. There'll be no snow for us in SC any time soon... 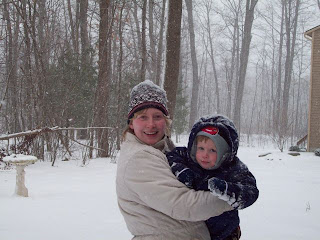 On the way back home we had some excitement. Our plane was an hour late to the gate in Albany, and then was delayed another hour on the runway while it was de-iced twice. Then, when we got to Detroit, a fist fight broke out in the gate catty corner to ours and every police officer, paramedic, and security officer descended on the area. High excitement! Luckily, it didn't affect our flight back, and we actually arrived in Asheville a few minutes early.