Day Out With Thomas

This weekend the Carolina Renaissance Festival opened--where I worked all through college enticing men to part with their money with help, in part, from a cleavage-enhancing black leather bodice. If you had told me then that in ten years' time, I would be in Charlotte on opening weekend and would not be at the Festival, but would instead be in the sleepy hamlet of Spencer riding Thomas the Tank Engine with my 2 year old and 4 month old boys, I would never have believed it. But there you go... No one can predict life's twists and turns.

Sam is totally obsessed with Thomas. It's very nearly his reason for life right now. He sleeps on Thomas sheets, is covered with a Thomas blanket and a Thomas comforter. He wears Thomas clothes and Thomas shoes and eats off Thomas plates and drinks from Thomas cups. First thing in the morning he asks for his Thomas video and plays with his Thomas train sets. At naptime and bedtime, he asks for his Thomas books. He brushes his teeth with his Thomas toothbrush and Thomas toothpaste and puts his toothbrush back in its Thomas toothbrush holder. Right before he goes to sleep, he listens to his Thomas music CD. Nothing makes him so happy. So when I discovered that Thomas would be nearby, I suggested to Tom that we make a pilgrimage. 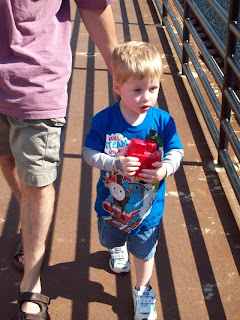 The sheer onslaught of Thomas was overwhelming. There was an actual Thomas train, a Thomas bouncy house, Thomas putt putt, Thomas temporary tattoos, Thomas train sets. I was overwhelmed by the sheer boy-ness of everything-trains, motors, mechanics, steel-and thought to myself "What the hell am I doing here? I was cool once..." 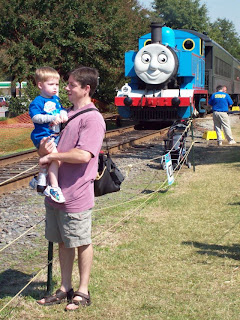 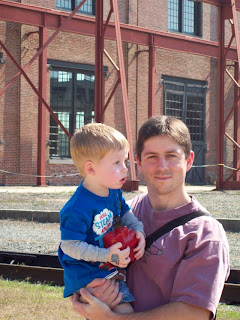 But then I took a look at Sam. It was quite possibly the high point of his life so far. He was totally awestruck. When he saw the trains coming, he would call out to them "I coming choo choo!" And couldn't stop telling Tom about the "big choo choo," "big track," "big truck," "big car." Everything about the day was big to him and I realized that even though my bawdy bodice days are behind me, I'm still cool. I'm just cool in a different way.

I can make a 2-year-old the happiest boy in the world. 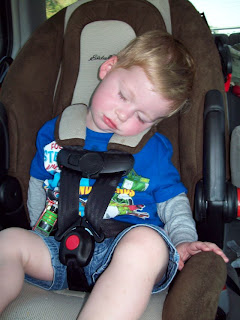