On Saturday, August 16th, we had Sam's birthday party at The Little Gym. It was a huge success. Sam and his friends had a great time playing on the equipment. I took some pictures of that, but none of them turned out because the kids were moving too fast for my camera! Sam had such a great time that we've signed him up for classes this semester. His first class was last Saturday and, as expected, he loved every minute of it! I think we have another gymnast on our hands. (Although he was absolutely RIVETED by Olympic diving...) 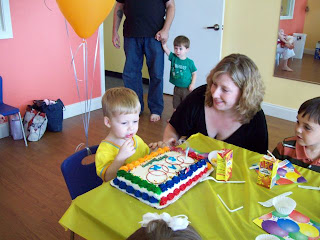 Last year, for his 1st birthday, Sam wasn't a fan of the cake and wouldn't even touch it. Not so this year... 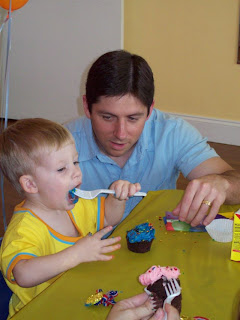 Not only did he eat the cake, he fed himself! Has it really only been a year? 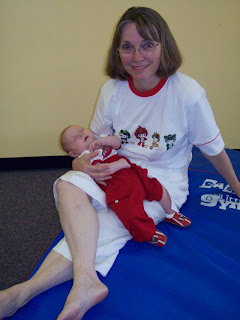 While birthday party fun was being had, John took a nap. I guess we know who the resident party animal is (and is not). 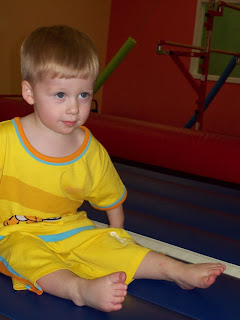 Here's the birthday boy in all his 2 year old glory. We had an Olympics-themed party (inasmuch as the cake was olympic themed and I gave the favors out in chinese takeout boxes decorated with olympic mascot charms). My mom was just in Beijing and brought back an authentic Olympic mascot outfit for Sam--which he wore to the party too.

I am totally digging The Little Gym party concept and will probably have another one there for John's first birthday unless I come up with something better between now and then. I'm new (obviously) to the toddler birthday circuit, but they've got a good thing going on there. You plunk down your money and they provide food, drink, paper products, snacks, use of the gym, and a cake, then you have the party, and they clean up afterwards. What could be better? Seriously?
Posted by Unknown at 12:01 PM