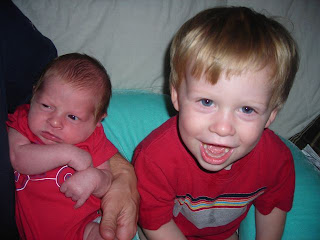 I'll start with the boys... I have high hopes for the two of them. Sam loves John almost as much as he loves Thomas the Tank Engine, and that's saying something. He has really embraced big-brotherhood and has shown a tremendous amount of patience when it comes to sharing mommy. It's obvious that he can hardly wait until John is big enough to play with him. The feeling is (starting to become) mutual. Lately, when Sam is playing, John is only happy when I hold him facing Sam so he can see everything that Sam is doing. Granted, this may only be a self-preservationist move on his part--better to see the block whizzing toward your head than getting hit unawares--but from my perspective, it looks like fascination. 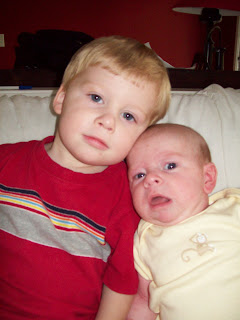 I'm glad that we had them so close together, but I can't help but think there are better ways of doing things than the way I'm doing things now. I am constantly fighting back the sea of toys and sticky foods that rush like a tidal wave around here hell bent on destroying us all. It's consignment sale time around here again and it was supremely satisfying to unload the mini-van of a whole lot of outgrown stuff. The theme from Rawhide was stuck in my head all night...head 'em up, move 'em out... Yeehaw!

I have come to the conclusion that our house is just not going to work for two boys. There's no dedicated place for them to play and our living room has becoming the playroom. I used to think an open floor plan was wonderful, but it allows full access to the clutter around here and is making me crazy. Tom and I are starting to save money now so that maybe by next fall we can buy a new house. We're going to try to find a house with a basement and plenty of room for Tom and I to have a work space. I'm excited at the prospect, even though it means cutting back even more than I already do.
My proofread is going a lot more slowly than I expected, but to be perfectly honest, I've been putting it off. Writing is one thing, but going through the text with a fine-toothed comb hurts my eyes after a very short period of time. I am quite pleased with the book as a whole though and very proud of my efforts. I'm itching to get started on the sequel, so I need to get finished up here. I can really tell how much I've grown as a writer over the past two years when I think about starting another book this time. Instead of a vague outline and thinking I'll just start writing and see what happens, I'm beginning to see whole scenes, the basic dialogue, plot threads, etc. It's very exciting to be in my head right now.
August is going to be an exciting month around here too. We're going up to Asheville to have a party introducing John to the family in a couple of weeks. The following weekend, Sam's having his birthday party at The Little Gym with all his friends. It's going to be Olympics-themed and I was up late last night working on the favors. I got small white Chinese take-out boxes and filled them with candy. Then I ordered Olympic mascot charms off of ebay and attached them to the handles of the take-out boxes. The boxes still looked a little bare though, so I found a cool website that will translate an English name into the corresponding Chinese phonetic characters. I was up last night with a sharpie writing the kids' "names" on their boxes. It turned out very cute, although I have NO future as a calligrapher.
And seeing as how half the year is already over, I think it's time to re-visit the yearly to-do list....
Posted by Unknown at 3:54 AM