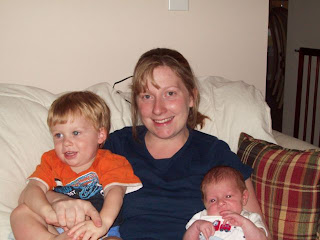 First of all, I *love* that expression, even though I think I'm too white to use it in everyday conversation. I'm so white, in fact, that I had to consult urbandictionary.com to make sure I really understood what it meant. The second definition listed is:

Someone or Something that is such a mess... the level of it, is off of the charts. It's past pathetic, past pitiful. It's to the point you almost have to walk away to keep from bustin a gut. Hot messes can exist in levels.

Apparently, I do understand what it means, and for the time being, it is the perfect description for my post-partum appearance. I tried to make an appointment at the salon today, but had no luck. My hairstylist is out until Tuesday. Hopefully, she'll be able to get me in on Wednesday or Thursday during the few short hours each day that Sam is in preschool. If I can't get in this coming week, I won't get a chance again until August when Sam goes back to school. By then I'll be beyond hot mess... I'll look like some kind of horrifying Cousin It.

I really shouldn't cave to this kind of vanity. Really, what difference does it make what my hair looks like? There are bigger issues at hand... rising gas prices, inflation, clothes drenched in numerous baby fluids. We should save the money, right?

And yet, I have these horrible nightmares of becoming the kind of shuffling, unkempt eccentric that makes Augra from The Dark Crystal seem like a fashionista. I've seen The Hours. I shudder at the thought of Virginia Woolf's shapeless dress and cardigan. And don't even get me started on Iris (Murdoch)...

I remember one time in college, talking to a non-English major friend, who informed me that I wasn't the typical English major, as I appeared relatively normal. Er, okay? Did I miss the part of freshman orientation where they passed out the black turtlencks and bongos? Are writerly people supposed to wear some kind of uniform? Shapeless dresses and cardigans for women? Tweed coats with elbow patches for men?

In a perfect world, it will start with a haircut. And from there, we'll work on the fashion. But first things first... I'm going to need to get that appointment first.
Posted by Unknown at 4:55 PM