Our neighborhood is normally really nice, but we do have a stray cat problem. Over the winter I noticed a distinctive cat smell every time I went out the front door. That was pretty bad. When four huge Tom cats had a turf war in our shrubbery, Tom and I decided that enough was enough. For all we knew there was an entire feral cat colony living under the Indian Hawthorne. The stuff grows like gangbusters, and since the previous owners never really trimmed it back, we were left with a horrible gigantic mass of plant that looked like this: 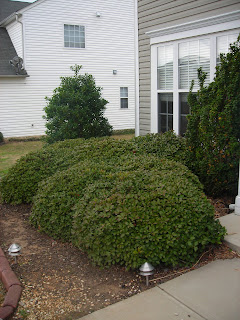 So we went to a local nursery and got a professional's opinion on what to replace the mess with. The result was this: three Azaleas, three Fire Powers (a plant whose leaves turn red in fall and winter), and two Knock Out Rose bushes. 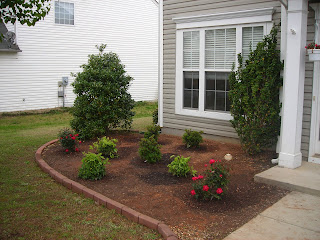 We're not completely finished with the landscaping. There's still the matter of replacing the little white rocks and planting some ground cover in the bare spot next to the driveway, but we think it's a big improvement. 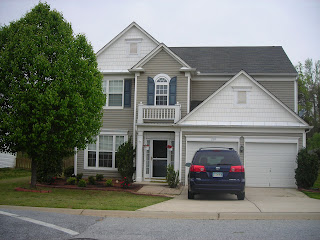