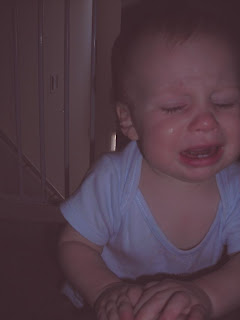 I had never heard of this before, but Sam's got it. :-(
On Tuesday, Dora and Wolfgang came over and I thought Sam felt a little feverish. I took his temperature and it was 101F. The next morning, it was 102F. I gave him Tylenol and hoped that would be the end of it. Wednesday afternoon he refused to nurse and then screamed when he'd try to eat. I took him to the pediatrician, thinking it might be strep or an ear infection.
The doctor found blisters all in the back of his throat. Poor guy.

Gigivostomatis is a herpes virus and is common in young children. The infection may be manifested with one to two mild sores inside the mouth, which may go unnoticed by the child. Other children, however may exhibit more severe symptoms, including fever, fiery red gums, pain associated with eating, irritability, malaise, headache, and painful ulcers on the tongue, lips, tonsillar areas, palate and oral tissues of the mouth.

That would be Sam. He hasn't been willing to eat or drink anything (not nursing, bottle, sippy cup, cup, spoon, nothing). He was getting dehydrated, so I called my neighbor, who was once a nurse, and she happened to have syringes on hand. I've been syringing liquid into his mouth and feeding him ice cream, which he will eat, all day. He's a very unhappy boy. Today blisters appeared on his tongue, gums, and lips. :-( I called the doctor and I'm to monitor his liquid intake and follow up with them tomorrow. Due to his age, there's really nothing else to do for him besides give him Tylenol/Motrin and push fluids.

A herpetic infection runs its course over a 7 to 10 day period.

I'm not looking forward to a week of this. Neither is Sam.